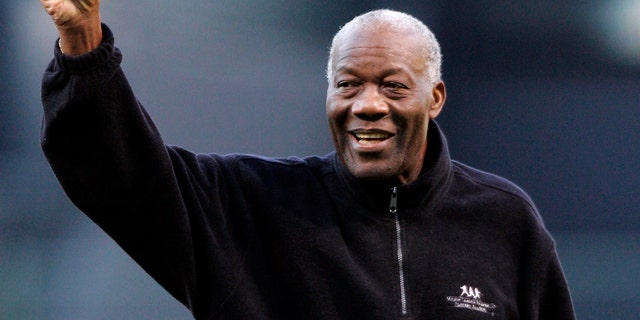 MINNEAPOLIS — Jim “Mudcat” Grant, the first Black 20-game winner in the American League and a key part of Minnesota’s first World Series team in 1965, has died. He was 85.

The Twins announced Grant’s death Saturday. No cause was given. Grant’s personal assistant, on behalf of the former right-hander’s family, informed the Twins of the death.

Grant spent less than four full seasons of his 14-year major league career with the Twins, but they were by far his best.

After being acquired in a trade with Cleveland on June 15, 1964, for George Banks and Lee Stange, Grant led the American League with 21 wins in 1965. Don Newcombe of the Brooklyn Dodgers was the first Black 20-game winner in the majors in 1951.

Grant’s career-best season helped the Twins post a 102-60 record for a spot in the World Series. He also led the league with six shutouts in 1965.

He started three times in that World Series against the Los Angeles Dodgers and won twice — including a 5-1, complete-game victory in Game 6, during which he also hit a three-run homer. Sandy Koufax and the Dodgers won Game 7.

Grant went 50-35 with a 3.35 ERA in 129 appearances, including 111 starts, with the Twins. He was traded to the Dodgers after the 1967 season and also wound up pitching for Montreal, St. Louis, Oakland and Pittsburgh.

Former MLB pitcher Jim “Mudcat” Grant waves to the crowd before throwing out the ceremonial pitch before the Indians host the Boston Red Sox in Cleveland, April 14, 2008. (Associated Press)

Grant was long known by his unique nickname, though there are varying stories about its origination. The native of Lacoochee, Florida, where he grew up poor in a small, segregated town north of Tampa, signed with Cleveland at age 18 and made his major league debut for the Indians in 1958. He finished his 14-year career with a 145-119 record and a 3.63 ERA over 571 appearances, including 293 starts.

After retiring from the mound, Grant worked in Cleveland’s community relations department and as a broadcaster while becoming an activist and advocate for Black participation in the sports. He co-wrote a book published in 2006, ” The Black Aces,” which chronicled the lives of his fellow Black 20-game winners like Bob Gibson and Ferguson Jenkins. In 2007, President George W. Bush honored Grant and “The Black Aces” at a White House ceremony for Black history month.

“At certain points in our past, we didn’t have a lot of African American pitchers,” Bush said that day. “I want to thank you, Mudcat, for showing courage, character and perseverance, and also thank you for setting an example.”

The Twins held a moment of silence for Grant prior to their game against Houston on Saturday night after showing a brief montage of black-and-white highlights from his playing career.

He was a frequent visitor to the team’s annual winter fan festival and maintained strong relationships with the Twins long after his playing days were done. Grant was an accomplished musician, too, with a talent for the blues. He sang a cover of Louis Armstrong’s “What a Wonderful World” at the 2011 memorial service for his former Twins teammate, Harmon Killebrew.

“Will never forget his smile, his voice or the way he could light up a room,” Twins president Dave St. Peter said on Twitter.