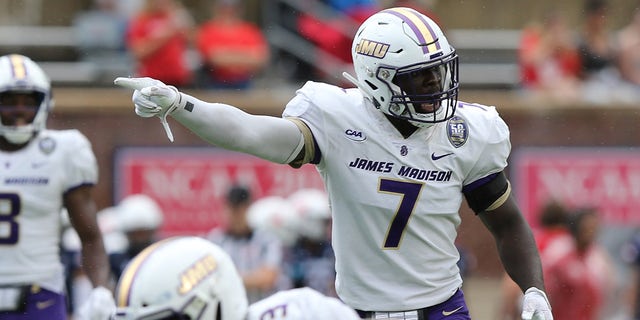 James Madison University athletics will be banned from Colonial Athletic Association postseason play for the 2021-22 season if the school accepts a bid into the Sun Belt Conference, school officials said Wednesday.

The CAA has a rule that allows it to block schools from competing in conference championships if they declare their intention to move to a different conference, according to the Richmond Times-Dispatch. James Madison is rumored to be announcing its intention to leave the CAA on Friday.

James Madison Dukes linebacker Kelvin Azanama (7) points into the backfield during a game between James Madison and the Richmond Spiders on Oct, 16, 2021, at E. Claiborne Robins Stadium in Richmond, Virginia. (Lee Coleman/Icon Sportswire via Getty Images)

“We have great respect for JMU as a conference,” CAA Commissioner Joe D’Antonio said, via the newspaper. “… I’ll be honest. It’s not my job to determine whether it makes sense or doesn’t make sense. It’s my job to make sure the bylaws are enforced the way they’re written.”

James Madison appealed to the other schools in the CAA, but those school officials voted to prohibit the Dukes from playing in the conference during the 2021-22 season.

“We were thorough and heartfelt in appealing to the league’s council of presidents, but that appeal was denied,” James Madison said in a statement. “Eight other Division I conferences have full members that have publicly announced an exit and yet all eight have allowed the student-athletes at those institutions to continue competing for championships.

A James Madison Dukes helmet on the sidelines prior to a game between the Dukes and the Richmond Spiders on Oct. 16, 2021, at E. Claiborne Robins Stadium in Richmond, Virginia. (Lee Coleman/Icon Sportswire via Getty Images)

“To our knowledge, the CAA is alone in this outdated bylaw. JMU has striven to be a good partner of the CAA and to treat other institutions as they would want to be treated, but that ideal is not being reciprocated. With our sights set on an important next step on Friday, it’s unfortunate that the CAA made this decision right in the middle of the fall championship season.”

James Madison will be allowed to compete in the CAA’s women’s soccer and field hockey championships since postseason play is set to start this weekend. The school’s football team, who is vying for a conference title, will not be able to play in the CAA’s postseason but could still get an automatic bid to the FCS tournament. The men’s soccer team is 11-4-1 with the CAA tournament starting next week.

The James Madison Dukes logo on their uniform during the game against the Maryland Terrapins at Xfinity Center on Dec. 19, 2020 in College Park, Maryland. (G Fiume/Maryland Terrapins/Getty Images)

Individual track and field, and swimming and diving athletes can still compete for singles championships but not team championships, according to the Times-Dispatch.

“If and when JMU does indicate to the conference that they are withdrawing as a member, then we do have a bylaw that indicates they will not be eligible to compete for (the) conference championship,” D’Antonio added.