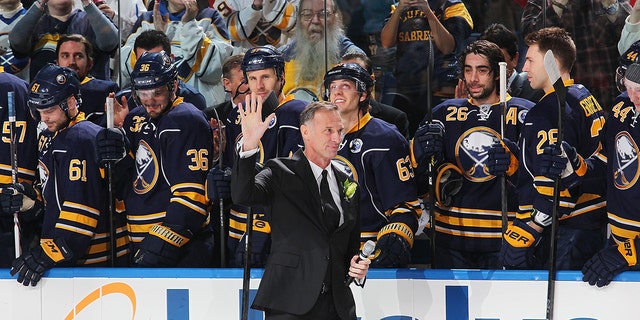 NHL legend and Hall of Famer goaltender Dominik Hasek slammed Washington Capitals forward Alex Ovechkin on Saturday for his remarks on Russia’s invasion of Ukraine and called on the league to suspend the contracts of all Russian players.

Hasek, a six-time Vezina Trophy winner, took to Twitter to blast Ovechkin, calling him an “alibist” and a “liar” after he told the media on Friday that he was calling for an end to the conflict.

“What!? Not only an alibist, a chicken s—, but also a liar! Every adult in Europe knows well, that Putin is a mad killer and that Russia is waging an offensive war against the free country and its people,” Hasek said. “The NHL must immediately suspend contracts for all Russian players!”

Hall of Fame goaltender Dominik Hasek of the Buffalo Sabres is introduced during ceremonies to retire his number 39 before their game against the Detroit Red Wings on January 13, 2015 at the First Niagara Center in Buffalo, New York.   (Photo by Bill Wippert/NHLI via Getty Images)

He continued: “Every athlete represents not only himself and his club, but also his country and its values and actions. That is a fact. If the NHL does not do so, it has indirect co-responsibility for the dead in Ukraine.”

Hasek acknowledged that while not every Russian athlete supports Putin, suspending all contracts is a “necessity.”

“I also want to write, that I am very sorry for those Russian athletes, who condemn V. Putin and his Russian aggression in Ukraine. However, at the moment I also consider their exclusion a necessity.”

Dominik Hasek #58 of the Yashin team stands on the ice waiting for penalty shots during a master show before the KHL All Star Game on February 05, 2011 at the Ice Palace in Saint Petersburg, Russia.  (Photo by Denis Moskvinov/KHL Photo Agency via Getty Images)

Ovechkin, who was previously made unavailable for reporters ahead of Thursday’s game against the New York Rangers, told reporters Friday that he hopes the conflict in Ukraine will “end soon.”

“Please, no more war. It doesn’t matter who is in the war – Russia, Ukraine, different countries – I think we live in a world, like, we have to live in peace and a great world.”

When asked by reporters if he supported Putin amid Russia’s aggression into Ukraine, Ovechkin – a known supporter of Putin – seemingly avoided criticizing Putin while reiterating his call for peace.

“Well, he is my president. But how I said, I am not in politics. I am an athlete and you know, how I said, I hope everything is going to be done soon,” he said. “It’s (a) hard situation right now for both sides and everything. Everything I hope is going to end. I’m not in control of this situation.”

Other athletes and sports governing bodies have made calls to boycott events in Russia since the attacks began on Thursday. On Saturday, the Polish and Swedish national soccer teams announced their refusal to play in the World Cup qualifier matches against Russia.