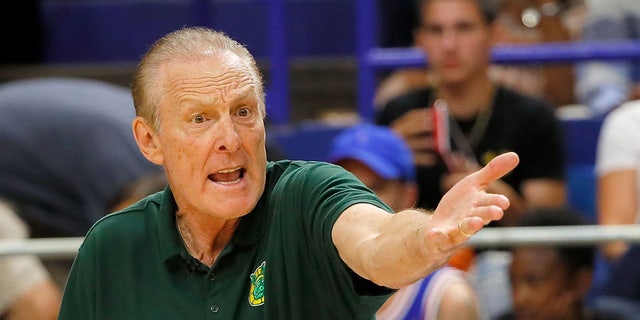 NBA fans and players will forever debate who the greatest player of all time is, whether this era of basketball is worse or better than previous eras and whether today’s star players could handle playing in the 1980s, 1990s or earlier.

One gripe, for example, came from Basketball Hall of Famer Rick Barry earlier this month.

The legendary basketball player told Basketball News he was upset with the officiating in today’s game. He said he thought players got away with too much traveling.

Rick Barry, coach of the Ball Hogs, calls a play during the game against the 3 Headed Monsters during week seven of the BIG3 three-on-three basketball league at Rupp Arena on Aug. 6, 2017, in Lexington, Kentucky. (Kevin C. Cox/BIG3/Getty Images)

“Get the officials to call it by the rulebook,” he said. “Stop the traveling, stop the carrying of the ball, stop the moving screens. Call the game according to the rulebook because players will adjust. If you’re going to allow them to get away with it, well, of course, they’ll keep doing it.

“It’s such an advantage to let a guy carry the basketball or take an extra step, that’s ridiculous. Why are you giving all these advantages to guys? They’re breaking the rules. It’s pathetic. For me to watch this game, the way I was taught how to play the game, to watch this, what they allow to let go, it’s an embarrassment. I’m sorry, it is.”

Jason Williams, who played from 1999 to 2011, sees things differently.

The dazzling former point guard told Fox News Digital in a recent interview he loves the way the game is being played these days.

Jason Williams of the Sacramento Kings waits on the court during the game against the San Antonio Spurs at the ARCO Arena in Sacramento, California.  The Spurs defeated the Kings 97-91. (Jed Jacobsohn  /Allsport)

“I can only answer that from my perspective. I love watching the NBA game nowadays. I love the ups and downs, how fast it is and all the three-pointers and things like that,” said Williams, who recently teamed up with Powerade to encourage athletes to take a “pause” every now and then.

Williams, who starred for the Sacramento Kings among other teams during his career, was one of the flashiest passers in the game for a while. His quick moves caught defenders off guard consistently, and he was able to create space from seemingly out of nowhere.

He told Fox News Digital he didn’t see the need for a larger emphasis on traveling or carries and said NBA officials have one of the toughest jobs.

“And to be honest with you, these guys are pretty good. They may be good enough to trick the referees’ eyes and the referee doesn’t really see that because the offensive guys, these NBA guards are so good and talented. With all that being said, I think some of these people will need to give the referees a little bit of a break because their jobs are very hard to do.”

The Kings selected Williams with the No. 7 overall pick in the 1998 draft. He would play with the Memphis Grizzlies, Miami Heat and Orlando Magic before retiring from the league following the 2010-11 season. He was on the Heat for their championship-winning 2005-06 season.