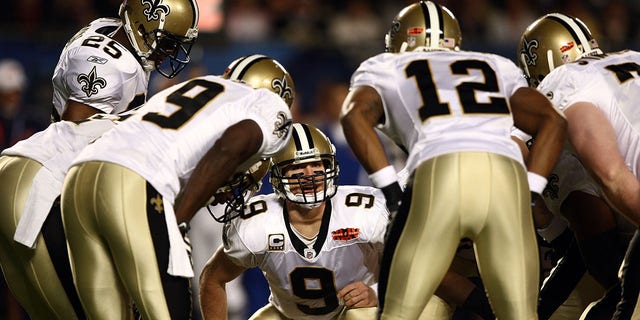 Ahead of Super Bowl LVI between the Los Angeles Rams and Cincinnati Bengals, Brees revealed some of what he wrote in his notebook ahead of the 13-3 season in 2009 that led to his first and only Super Bowl title.

SUPER BOWL 2022: WHAT TO KNOW ABOUT THE GAME

Quarterback Drew Brees (9) of the New Orleans Saints huddles with his team against the Indianapolis Colts during the Super Bowl Feb. 7, 2010, at Sun Life Stadium in Miami Gardens, Fla. (Donald Miralle/Getty Images)

“Going thru some old notes from the 2009 Super Bowl Season. On the inside of my notebook …Goals for the 2009 Season,” Brees wrote on Instagram.

Some of the goals: “Exercise your leadership everyday,” “Study notes and exercise game plan after meeting and before bed,” and “Compete – finish strong.”

Drew Brees of the New Orleans Saints hoists the Vince Lombardi Trophy on the podium as head coach Sean Payton looks on after they defeated the Indianapolis Colts in the Super Bowl Feb. 7, 2010, at Sun Life Stadium in Miami Gardens, Fla.  (Rob Tringali/Sportschrome/Getty Images)

Brees led the NFL with 34 touchdown passes and threw for 4,388 yards. He finished second in NFL MVP and Offensive Player of the Year voting. He was a Pro Bowler and named Second-Team All-Pro.

Despite losing their final three games of the season, the Saints still managed to wrap up the NFC South and got a first-round bye in the playoffs.

He led the team to playoff wins over the Arizona Cardinals and the Minnesota Vikings and then got a victory over the Peyton Manning-led Indianapolis Colts in Super Bowl XLIV.