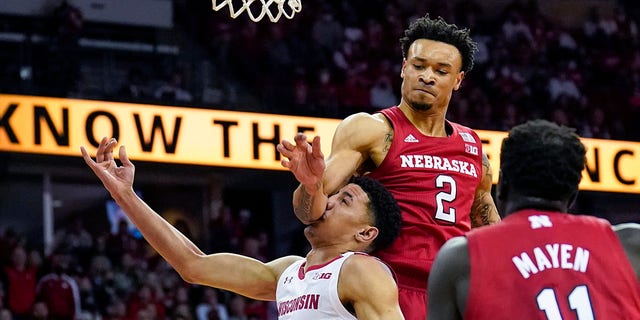 Tenth-ranked Wisconsin lost leading scorer Johnny Davis when he was injured on a flagrant foul early in the second half, and the Badgers missed a chance to clinch the Big Ten title outright by falling to Nebraska 74-73 Sunday.

Davis was hurt when he was fouled on a layup try by Trey McGowens with 17:32 left. Davis went to the locker room and didn’t return to the bench, and the Badgers said he was out with a lower body injury.

Davis averages 20.3 points and 8.3 rebounds. He scored 10 before being injured by McGowens, who was ejected.

Chucky Hepburn hit two of three free throws for Wisconsin with 19.8 remaining, cutting the deficit to 74-73 as Verge fouled out.

CJ. Wilcher missed the front end of the bonus for Nebraska, but Hepburn — who beat No. 8 Purdue on Tuesday with a last-second 3-pointer — missed a 3-point try from the top right and the Huskers secured the rebound.

Nebraska played with leading scorer Bryce McGowens — Trey’s brother — who averages 17 points per game and injured his hand in a victory over Ohio State on Tuesday.

Brad Davison scored 20 points for Wisconsin, which had won five in a row. Tyler Wahl and Chris Vogt added 13 apiece.

Wisconsin trailed by 12 midway through the first half. The Badgers rallied with a 12-2 run, going in front 49-47 on two free throws by Davison and were in the bonus for the final 16:18.

Verge tied it with a layin, but was called for a technical. Davison hit both free throws to start a string of eight consecutive points from the line to give Wisconsin a 57-49 lead with 13:40 left.

Wisconsin had been averaging only 8.6 turnovers per game, fewest in Division I. But the Badgers committed seven in the first 10 minutes as Nebraska surged to a 30-18 lead, hitting 12 of 21 shots.

Nebraska: Nebraska could move into the No. 13 seed in the conference tournament with a win by Northwestern over Minnesota on Sunday evening.

Wisconsin: If Illinois wins Sunday, the Badgers would drop to the No. 2 seed in the conference tournament. Either way, much depends on Davis’ status.

Although the Badgers topped No. 8 Purdue 70-67 on Tuesday, the loss to Nebraska could drop them in the poll.

Nebraska plays in the first round of the Big Ten Conference tournament on Wednesday.

Wisconsin plays Friday in the quarterfinals of the Big Ten Conference tournament.