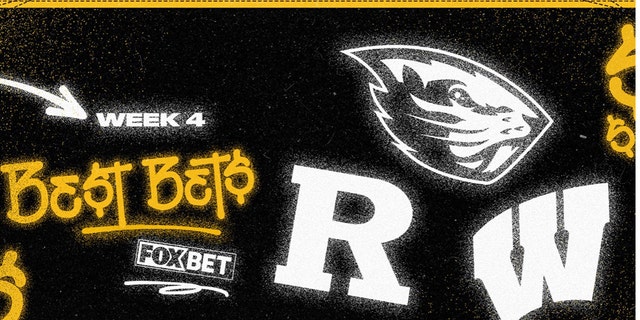 We have another weekend starting with a heavyweight clash on FOX’s Big Noon Kickoff!

Let’s dig into my thoughts on the Notre Dame Fighting Irish and Wisconsin Badgers squaring off, plus more for Week 4 of the college football season!

Here are my favorite Week 4 bets on the slate, with all odds courtesy of FOX Bet.

This Saturday features a monster matchup in Chicago between two storied programs that fancy themselves with being physical in the trenches.

Unfortunately for Notre Dame, that’s hard to validate right now. The Fighting Irish have routinely had outstanding offensive lines, but with attrition to the NFL and injuries at left tackle, that unit is struggling. They rank 122nd in the country in yards per rush, 91st in pressure rate, and are very bad when they need a yard.

And these numbers are against the likes of Flordia State, Toledo, and Purdue. Not exactly the 1985 Bears.

When given time, Notre Dame quarterback Jack Coan — former Wisconsin signal-caller — has been good enough. He’s completing 63% of passes and ranks 28th in the country in air yards per pass.

However, the entire ND offense is up against a tough Wisconsin team off a bye. You can be sure that defensive coordinator Jim Leonhard will have his defense gassed up for this contest.

Even though the Badgers have only played two games, their defense ranks first in the country at 3-and-out percentage and second in rushing efficiency. They are just above average in pressure rate, but considering they have had two weeks to prepare for this offensive line, I’d expect them to get after Coan.

On the other side of the ball, Wisconsin is the definition of establishing the run. The team only has 54 pass attempts this season compared to 98 rushing attempts by their backs.

The Badgers feature a powerful rushing attack facing an Irish defense that’s decent at stopping the rush but awful at limiting explosive runs. My concern for the Notre Dame defense is that Wisconsin will continue to pound the rock, leading to eventual explosive runs allowed.

The Irish’s best bet is to attack the Badgers pass protection unit, and force them to rely on quarterback Graham Mertz, who is more of a game manager than an elite ball thrower.

In Wisconsin’s Week 1 performance, they nearly tripled Penn State‘s first downs and won the time of possession by almost 20 minutes, but they also turned it over three times and went just 1-for-4 in the red zone. Those results are muddying the perception of what the Badgers can do in this game.

Wisconsin is better in the trenches, and they are coming off a bye. Give me the Badgers!

For more up-to-date news on all things college football, click here to register for alerts on the FOX Sports app!

I love the Beavers in the Coliseum this weekend. Oregon State head coach Jonathan Smith has been building his program for this moment.

The Beavers started the season with Sam Noyer under center, but he was benched early in the second half against Purdue due to trouble finishing drives.

Enter Chance Nolan, who went 10-for-16 for 157 yards. More importantly, he led the offense to score twice in the fourth quarter. Since then, Nolan has played well against two powder puffs, but this weekend will be a step up in competition against this USC defense.

USC’s defense doesn’t have a calling card other than pressuring, which they enjoy under defensive coordinator Todd Orlando. The Trojans blitz on nearly 40% of dropbacks.

The Beavers’ rushing attack, which comes in ranked sixth in the country in success rate, will be able to attack this Trojans’ defense right in the middle, as they rank 110th in explosive rushing defense.

On the flip side, I’m always out on the Trojans’ offense because they can’t push anyone around. USC scored 45 points against a piss-poor Washington State defense while their rushing attack produced just 16 carries for 27 yards from their running backs.

Teams with competent defenses will sit back in a zone and make the Trojans slowly go down the field. USC is one of the worst offenses in the nation with explosive plays, and when it’s time to get a yard, they can’t do it.

The Trojans also rank 123rd in first and goal situations and have a 50% success rate in 12 red zone appearances.

The formula is there for the Beavers to pull an upset. Keep everything in front of them on defense, pound the rock, and hit your shot plays, something Jonathan Smith always has ready.

Trojans’ stud receiver, Drake London, is in concussion protocol, and if he can’t go, USC will struggle on offense.

Finally, there’s significant sharp action on Oregon State, and the line is coming down. Grab the points now, with maybe a little sprinkle on the moneyline.

Geoff Schwartz played eight seasons in the NFL for five different teams. He started at right tackle for the University of Oregon for three seasons and was a second-team All-Pac-12 selection his senior year. He is an NFL analyst for FOX Sports. Follow him on Twitter @GeoffSchwartz.