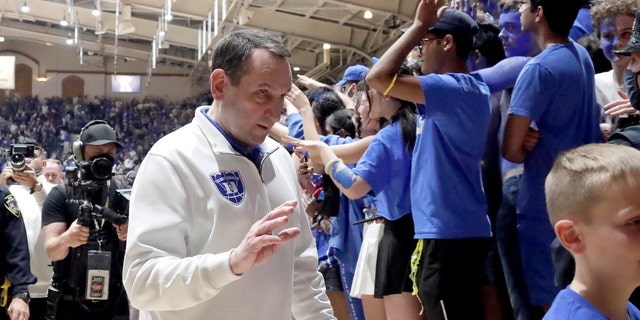 The day that was all about the coach who has 1,196 career victories and five NCAA championships abruptly turned into a season-defining performance for the Tar Heels, who played fearlessly in an extra rowdy arena and shot 59% after halftime.

It marked the first time an unranked North Carolina team had beaten a top-5 Duke team in Cameron since 1990, and it came a month after the Blue Devils had won by 20 in Chapel Hill.

“All week, we just talked about our competitive fight,” first-year UNC coach Hubert Davis said, “that we had to do three things: We had to plant our feet, we had to stand our ground and we had to fight. … I just felt like, as the game went on, we started to just gain more and more confidence.”

Duke coach Mike Krzyzewski walks off the floor following a tribute in his honor after the team’s NCAA college basketball game against North Carolina, Saturday, March 5, 2022, in Durham, N.C. Krzyzewski, who is retiring after the season, coached his final game at Cameron Indoor Stadium.  ( Associated Press)

By the final minutes, the Tar Heels (23-8, 15-5 Atlantic Coast Conference) were stretching the lead to double figures, hitting clinching free throws and leaving the “Cameron Crazies” in disbelief that Krzyzewski’s final home game after 42 years at the helm of Duke would end this way.

The school held an on-court ceremony for Krzyzewski after the game, though the coach first grabbed the microphone with the loss on his mind.

“I’m sorry about this afternoon,” he began, then waved off cheers from the fans. “Today was unacceptable, but the season has been very acceptable. And the season isn’t over.”

Krzyzewski could only watch from his seat at the end, when UNC was in firm control. And when the horn sounded, the Tar Heels mobbed each other to celebrate on the court, while Caleb Love — who overcame an 0-for-8 shooting start to score 15 of his 22 points after halftime — jawed at the Crazies.

Armando Bacot scored 23 points to lead UNC. R.J. Davis had 21 and Brady Manek 20, marking the first time in program history that the Tar Heels had four 20-point scorers in the same game.

UNC led by just two with 5 1/2 minutes left when they made their move, with Davis getting by Banchero for a driving layup, followed by Love penetrating to find Manek for the score to take a 79-71 lead with 3:52 left.

Manek also came through with one of his five 3-pointers at a critical moment, answering one from Wendell Moore Jr. to keep the lead at eight and maintain momentum.

“It was a big moment, actually a huge moment this week,” Moore said. “I felt like we kind of got lost in everything.”

90-plus former players in attendance

Krzyzewski had tried all season to deflect questions about his looming retirement — even eschewing the use of the word “last” — and trying to avoid being a distraction or creating additional pressure on his team. That began to change more in recent days as the moment drew near for a coach who has long taken a live-in-the-moment approach.

More than 90 former players were in attendance, including some of the program’s biggest names like Grant Hill, Shane Battier, J.J. Redick, Jay Williams, Danny Ferry and Christian Laettner. They gathered to create two lines on the court — several motioning to the student section for more noise or capturing video with their cellphones — to make an aisle for Krzyzewski to walk to midcourt to join them for a group photo captured from the rafters.

After returning for the final pregame minutes, Krzyzewski appeared to be fighting back tears during the national anthem and dabbing his eyes with a tissue during the final huddle before tipoff.

Associate head coach Jon Scheyer, who is designated as Krzyzewski’s successor next season, took a moment to pat his mentor on the right shin before the opening tip.

UNC: Davis said he wasn’t focused on the “pageantry” of Saturday’s farewell, but was instead worried about preparing his team to compete. He certainly did that, with the Tar Heels attacking the rim and showing a competitive fire that wasn’t apparent in last month’s 87-67 loss. By far, it is UNC’s best win this season, and represented a huge improvement for an NCAA Tournament resume that was light on high-quality wins.

Duke: The Blue Devils had already secured the program’s first outright ACC regular-season title since 2006 and had lost just once since mid-January, falling at home on a last-second 3-pointer to Virginia. But this time, they couldn’t corral UNC’s backcourt of Love and Davis — who struggled mightily against Duke’s pressure defense in the first meeting — and couldn’t manage a response as the Tar Heels made their move in the final 6 minutes.

The former Blue Devils players weren’t the only notable names in the cramped confines of the 82-year-old arena where Krzyzewski has won 88% of his games over 42 seasons.

There was also a sighting of retired NBA great Dirk Nowitzki, who took a walkthrough of the Duke practice facility earlier Saturday and ran into Moore. Moore quickly asked for a photo with the former world champion.

UNC: The Tar Heels own the No. 3 seed for the ACC Tournament in New York and open play in Thursday’s quarterfinals.

Duke: The Blue Devils hold the No. 1 seed for the ACC Tournament and also open play Thursday.