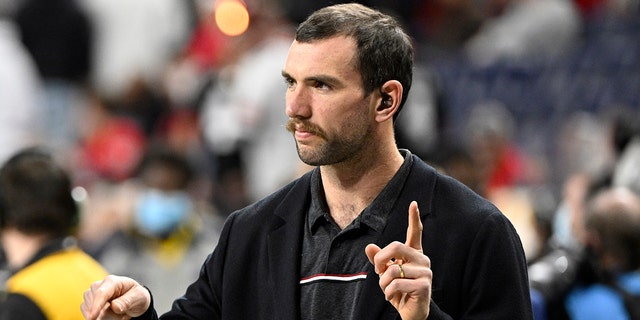 Andrew Luck, the former Indianapolis Colts quarterback who abruptly retired from football before the start of the 2019 season, made a rare public appearance ahead of the college football national championship on Monday.

Luck was at Lucas Oil Stadium in Indianapolis and joined 2012 NFL Draft classmate Robert Griffin III for the ESPN pregame broadcast of the title game between Alabama and Georgia. Both players were asked what advice they’d give for Bryce Young and Stetson Bennett going into the game.

Andrew Luck on the field before the 2022 college football national championship game between the Alabama Crimson Tide and the Georgia Bulldogs at Lucas Oil Stadium Jan. 10, 2022, in Indianapolis. (Marc Lebryk-USA TODAY Sports)

“That’s a great question,” the mustachioed Luck said. “Certainly, limit turnovers. I think that’s the biggest factor in winning or losing games and enjoy the moment.”

Griffin said the quarterbacks should just focus on doing their jobs but wasn’t focused on the game at the point. He got in one question about what Luck has been doing since retiring from the NFL.

Andrew Luck on the field before the 2022 CFP college football national championship game between the Alabama Crimson Tide and the Georgia Bulldogs at Lucas Oil Stadium Jan. 10, 2022, in Indianapolis. (Marc Lebryk-USA TODAY Sports)

“Full-time daddy duty,” he said. “It’s been a complete joy.”

Many fans getting ready to watch the game were happy to see Luck back near a football field.

Luck was a standout at Stanford before the Colts took him with the No. 1 pick in 2012. He was on Indianapolis from 2012 to 2019 before retiring.

Andrew Luck of the Indianapolis Colts throws a pass downfield in the game against the Dallas Cowboys in the second quarter at Lucas Oil Stadium on Dec. 16, 2018, in Indianapolis, Indiana. (Joe Robbins/Getty Images)

The 32-year-old star had suffered a bunch of injuries and put the NFL on the backburner. He was a four-time Pro Bowler and 2018 Comeback Player of the Year.