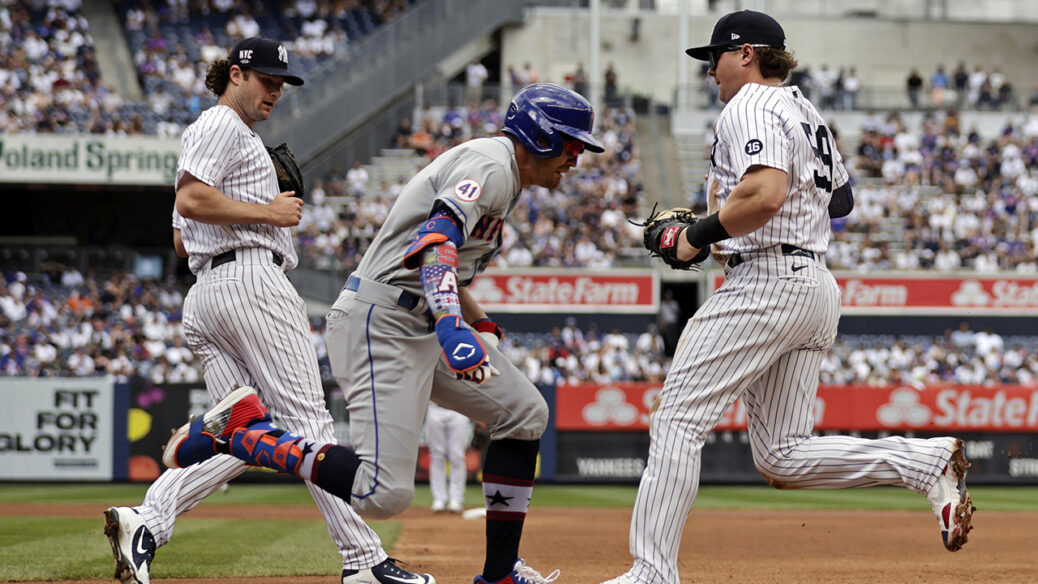 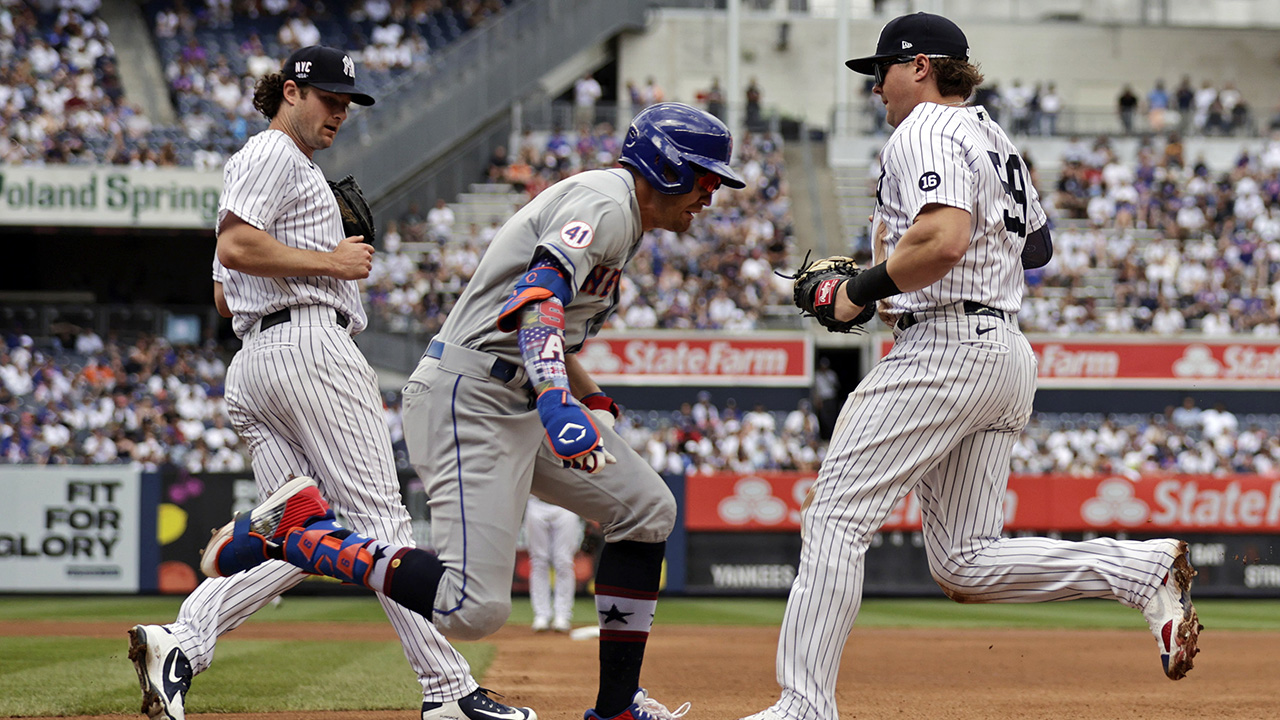 Pete Alonso hit a tying home run off imploding Yankees closer Aroldis Chapman leading off the last inning, José Peraza lined a go-ahead two-run double that was aided by interference from a visiting fan in the Bronx and the New York Mets stunned their crosstown rivals 10-5 Sunday to open a split doubleheader.

Alonso opened the fifth by dropping his barrel on Chapman’s 1-2 slider near the bottom of the zone and lofting it into the visitor’s bullpen to tie it at 5.

Billy McKinney singled to load the bases, Lucas Luetge struck out pinch-hitter James McCann and Peraza then ripped a ball that would’ve hit midway up the left field wall. Yankees outfielder Tim Locastro might have had a play on it, but a fan in a Mets jersey reached over to catch the ball.

Confused players and fans initially had no idea where the ball went. Locastro pointed at the fan angrily, and umpires conferred on the infield before awarding Peraza two bases. The Yankees didn’t argue.

Brandon Nimmo followed with a two-run single and Francisco Lindor added an RBI hit before Alonso struck out to end the inning. The NL East-leading Mets also batted around during an inning in an 8-3 win Saturday at Yankee Stadium.

Chapman (5-3) failed to record an out in his first appearance since giving up a tying grand slam in the ninth inning during an 11-8 loss Wednesday to the Los Angeles Angels. The flame-throwing left-hander entered with a 17.47 ERA over his previous eight outings.

DJ LeMahieu put the Yankees up 5-4 in the fifth when he scored on Marcus Stroman’s wild pitch, but the Yankees still lost for the seventh time in eight games. They dropped to 41-41 as their second half started, the latest into a season they’ve been at .500 since they were 56-56 on Aug. 9, 2016.

The Mets chased Yankees ace Gerrit Cole with one out in the third, his shortest outing since a two-inning stint on Sept. 12, 2016, while with Pittsburgh. He was charged with four runs and six hits, tyung a season high with three walks.

Cole has a 5.24 ERA since it became clear in early June that Major League Baseball planned to crack down on pitchers’ use of illegal foreign substances. He had a 1.78 ERA prior to that.

The clubs were set to conclude the season’s first Subway Series with a 7 p.m., seven-inning nightcap. A season-high 42,714 tickets were sold for the opener, topping Saturday’s total of 40,047 for the largest crowd at either New York stadium since before the pandemic.

Lindor booted a ball in the second inning that led to three Yankees runs. He misplayed Gio Urshela’s potential double-play grounder, setting up Kyle Higashioka’s two-run double a few batters later. Tim Locastro followed with a sacrifice fly in his first at-bat since being acquired from Arizona on Thursday. Two of New York’s three runs in the inning were unearned.

Cole stranded baserunners in the second and third innings, but his high-wire act fell apart in the fourth when he allowed two runs, three hits and two walks before leaving with the bases loaded and one out. Manager Aaron Boone gave the ball to Jonathan Loaisiga, who allowed Lindor’s tying RBI single before retiring Alonso with the bases loaded to preserve a 4-all tie.

Loaisiga completed 2 1/3 scoreless innings but allowed two baserunners in the sixth. He was replaced by Chad Green, who held a one-run lead by getting Smith to pop up.

Nimmo and the Mets were dumbfounded when replay officials didn’t overturn an out call on his grounder in the third inning. Replays showed that Nimmo narrowly — but clearly — beat first baseman Luke Voit in a footrace to the bag, but the replay crew in Midtown Manhattan upheld first base umpire James Hoye’s out call.

Yankees: LHP Zack Britton (hamstring) will throw at least one more bullpen Tuesday before New York considers activating him. … RHP Luis Severino, who strained his right hamstring June 12 in his second rehab appearance since Tommy John surgery, felt good after throwing a bullpen Saturday and will throw off the mound again this week. Sim games or a rehab assignment could soon follow. … LHP Wandy Peralta was recalled from Triple-A as the 27th man.