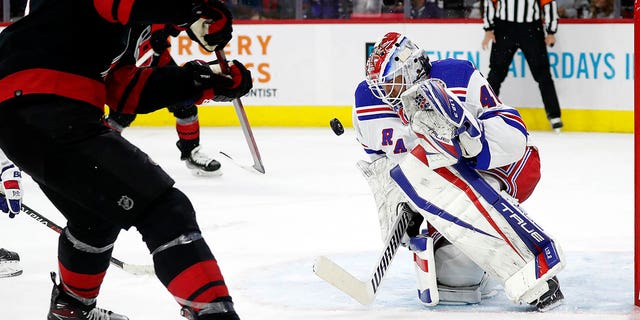 Alexandar Georgiev made a season-high 44 saves for his seventh career shutout, Chris Krieder broke a scoreless tie late in the second period and the New York Rangers beat the Carolina Hurricanes 2-0 on Sunday night.

It was the first shutout for Georgiev since beating Philadelphia 9-0 on March 17, 2021.

“It has been a long time since I had a game like that, where it has been not a lot of goals,” Georgiev said.

Georgiev, who played for just the second time in New York’s last five games, picked up his first road victory since Jan. 8 at Anaheim.

He was tested by at least 14 shots in each period.

“They shoot a lot of pucks,” Georgiev said. “The first period was important to keep them at zero. … It’s a team shutout, for sure.”

Frank Vatrano added an empty-net goal with 41.3 seconds to play to clinch it for the Rangers.

Combined with a winning goal in the final minute Saturday night at Tampa Bay, it was quite a 24-hour span for the Rangers.

“I think we showed we have to it takes to win,” Vatrano said.

The loss sent the Hurricanes to their first four-game losing streak of the season (0-3-1). It also marked the end to a 14-game home-ice points streak, one shy of a franchise record.

Frederik Andersen stopped 16 shots for the Hurricanes, who were blanked for the third time this season.

“We had too many good chances to not score,” Hurricanes center Sebastian Aho said.

“That was probably one of our better games all year,” Brind’Amour said. “Their goalie played great, and that’s end of story.”

The Rangers have won four of their last five games. This latest success was a struggle.

“We were lucky,” coach Gerard Gallant said. “We were a tired hockey team. They were all over us. They dominated, but we found a way to get two points.”

Kreider notched his team-high 41st goal at 16:39 of the second period on a redirection from Jacob Trouba’s delivery. He has scored in three of the last four games and has seven goals in 10 games in March.

The Rangers only had 10 shots through two periods, while the Hurricanes put the puck on net 29 times without scoring.

GLAD TO HAVE YOU

Vatrano was in his third game with the Rangers since a trade from the Florida Panthers. The goal was his first point with the new team.

This result gave them their first three-game road winning streak since a stretch that ended in mid-December.

Carolina defenseman Tony DeAngelo was back in the lineup after an 11-game absence because of an upper-body injury. He’s in his first season with the Hurricanes after arriving from the Rangers. He had three points in a victory against his former team in January.

Carolina went with a lineup of seven defensemen, in part because of a shortage of forwards.

Hurricanes right wing Nino Niederreiter sat out to serve a one-game suspension for a slash on Washington’s Axel Jonsson-Fjallby on Friday night.

Meanwhile, Hurricanes left wing Jordan Martinook missed his second game in a row and is expected to be out for at least a couple of weeks with a lower-body injury.

Rangers: At New Jersey on Tuesday.