Setting the Stage: Ever since their inception, Primus have always been a “live band.” Sure, there’s no denying that such studio offerings as Frizzle Fry, Sailing the Seas of Cheese, and Pork Soda are ‘90s quirk-rock classics … but long-time fans can verify that the trio – singer/bassist Les Claypool, guitarist Larry LaLonde, and drummer Tim Alexander – are best experienced in concert, as they most certainly take their songs to the next level onstage.

So, with a proposed 2020 tour (that was to see the trio pay tribute to Rush’s 1977 prog classic A Farewell to Kings), scrapped due to COVID shutting down tours, it was announced that Primus’ lone show of the year – titled “Alive From Pachyderm Station” – would be streamed on December 11th, filmed at Claypool’s winery, Claypool Cellars, in Sebastopol, California.

Taking the Stage: After a disclaimer stating that the performance had been produced in compliance with all health and safety measures because of COVID, “Alive From Pachyderm Station” began with a birds eye view of a vineyard … before the fun began. (While not in full-screen mode, purchase links for three special shirts created for this event were available at the bottom of the screen.)

Primus were then seen in a wood-paneled room that had a bar, wine bottles enclosed in glass, and Christmas lights hung on the walls. A bespectacled Claypool sported semi-short blond hair and his signature Pachyderm bass; LaLonde rocked a Gibson SG; and Alexander wore a Brian Johnson-esque cap. All were clothed in black, while Les and Larry had masks/bandanas around their necks. With all three members facing each other — “rehearsal room style” — Primus launched into a set-opening rendition of “Those Damned Blue Collar Tweekers”. And from the get-go, it became apparent that the band had secured a very good sound mix — since it was filmed in advance, it gave the lads time to fine tune it just right.

After Les took a solo in the midst of “Tweekers”, he began a rapid flurry of slapped notes … which led to a familiar-sounding tune. Could it be the rarely-performed “Lacquer Head”, off the under-appreciated Antipop? Yes, indeed it was! And this set a precedent for the evening — offering up surprise renditions of rarely-performed tunes from the band’s mid-late ‘90s period, when Alexander had exited the band.

Despite the long layoff, there was no rust to be shaken off — as proven by the airtight groove they whipped up on “Sgt. Baker”, inserted in the midst of “Too Many Puppies” (another surprise “song within a song”). And the group’s penchant to stretch out tunes with mid-song jams remained — as heard in the middle of “American Life,” during which a split screen was utilized which mirrored its members (a la Jimmy Page’s guitar solo in “Stairway to Heaven” in The Song Remains the Same film).

After favoring Gibson guitars for the first few numbers (besides the aforementioned SG, and a Les Paul), LaLonde returned to a Strat (the guitar model he was primarily aligned with early on) in time for “Pudding Time”. After another tune rarely aired nowadays, “The Antipop”, was performed, Les broke out his upright bass for “Sailing the Seas of Cheese”, which fitting in with the band’s more jammy approach, was extended and its lyrics repeated. With upright still in hand, a rendition of “Mr. Krinkle” followed.

The infrequently performed “The Heckler” (a tune off their first-ever album, Suck On This) saw Les return to his regular electric bass – with some trippy/warped visuals added – before probably the night’s biggest surprise when it came to the uncommon tune category. How about the supposedly never-before-played live “Eclectic Electric”?! Yes, indeed it was, as the tune was in full effect (including its heavy, rapid-riffing section midway through – originally supplied by James Hetfield and Jim Martin on the studio recording), along with further spacey effects.

Up next was the perennial concert staple, the epic “Harold of the Rocks”, before “Over the Electric Grapevine” saw Les pick up his ol’ trusty fretless six-string Carl Thompson “rainbow bass.” And while he still had the six-string bass wrapped around his neck, why not offer up a rendition of “Jerry Was a Race Car Driver”? And the screen going black for a second during the song’s infamous “Go!” and “Dog will hunt!” parts was an amusing/unexpected touch.

“The Seven” (a selection from Primus’ latest studio offering, 2017’s The Desaturating Seven) followed, before things wrapped up with a long and winding, 10-minute rendition of “Southbound Pachyderm”. Truth be told, a more uptempo and succinct tune, like say, “Tommy the Cat”, “My Name Is Mud”, or a real shocker, like “Making Plans for Nigel”, would have been more appropriate – as it would have ended things with a bang … rather than, a jam.

And in the closing seconds, Les blurted out “Merry Christmas Lou!” (Lou who? Diamond Phillips? Ferrigno? Costello?), before more drone-shot footage of an expansive vineyard followed along with credits. Weighing in at an hour-and-a-half long, “Alive From Pachyderm Station” was certainly a fun evening spent with the Primus lads, who hopefully we will be able to experience in person on a concert stage once again in 2021.

If you missed the show, no worries. The concert is available on demand for 72 hours from its December 11th premiere at this location.

Screengrabs From “Alive From Pachyderm Station”: 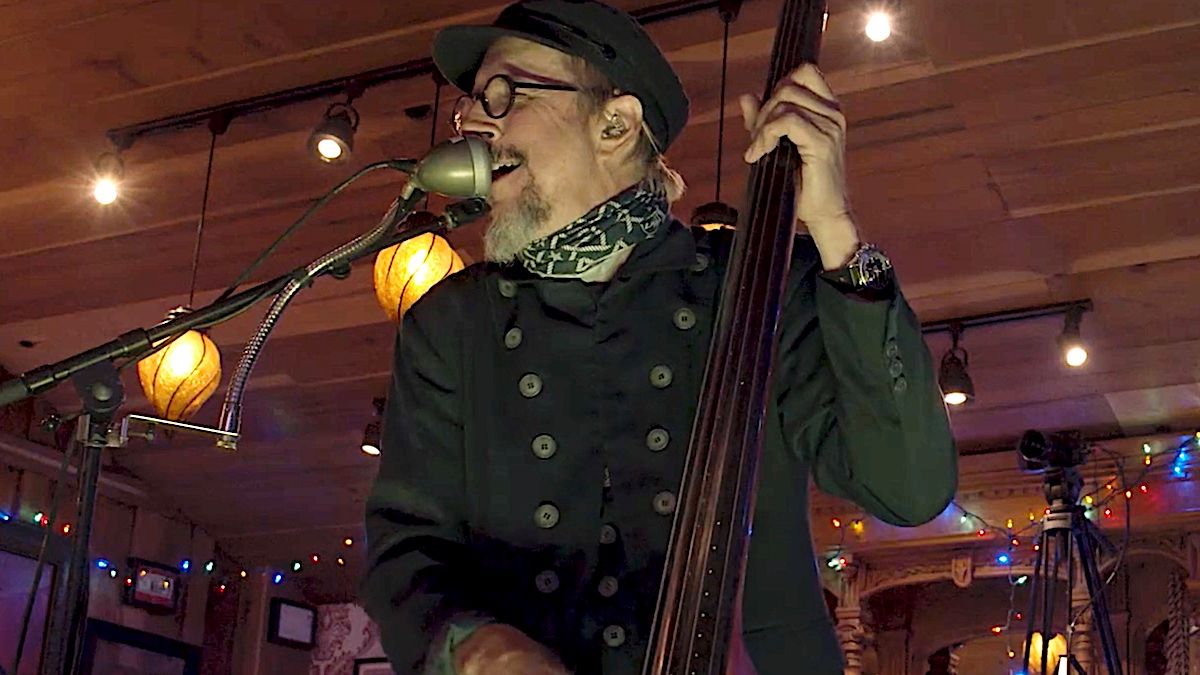 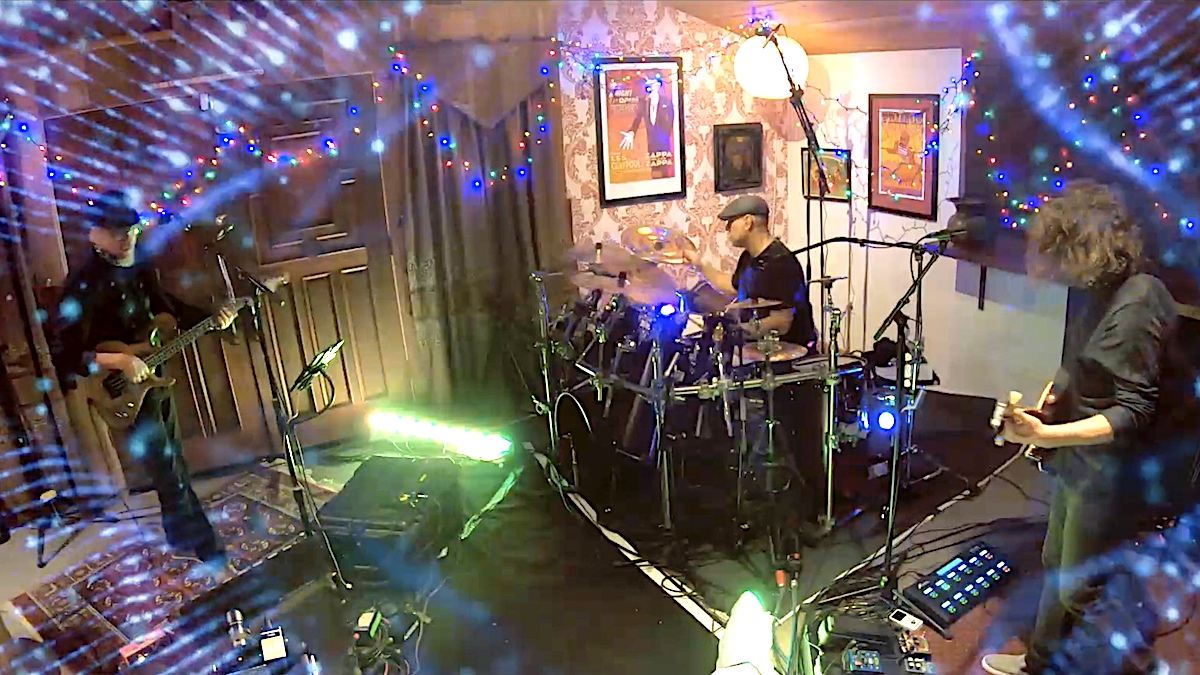