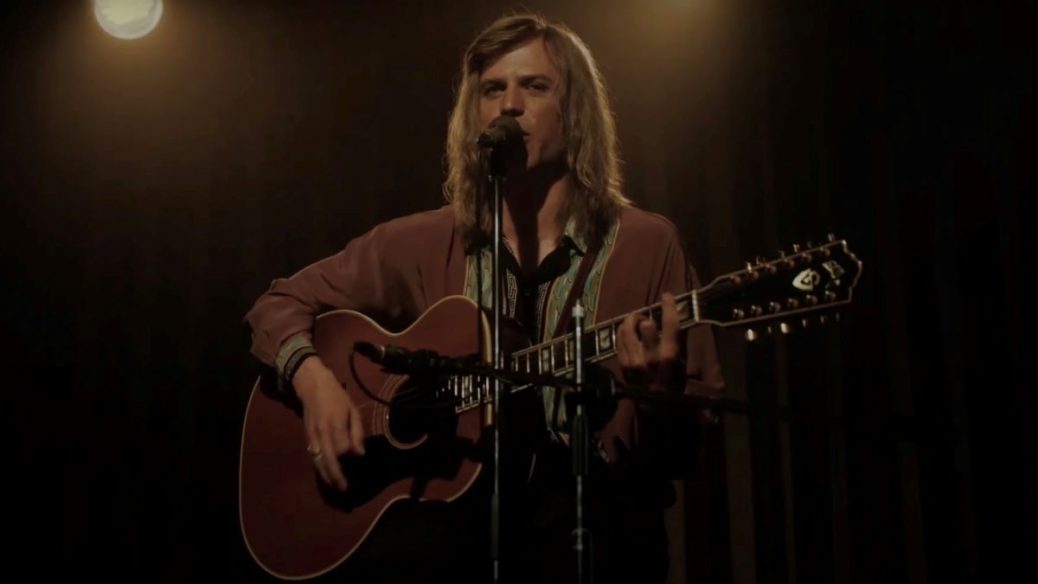 The Pitch: It’s 1971 and David Bowie (Johnny Flynn) is about to make it big. Well, actually, he already kind of had. He’d just released “Space Oddity”, which would have become legendary even if he’d never released another album. We’d still be hearing it in commercials like we do Rupert Holmes’ “Escape (The Pina Colada Song)” regardless, so the “what if?” at the center of the movie isn’t quite as pulse-pounding as writer-director Gabriel Range and his co-scribe Christopher Bell seem to imagine it to be.

Anyway, Bowie’s about to be famous, but he’s concerned that the US doesn’t like or get him and that the record label doesn’t know what to do with him. So, they send him to the US to introduce himself, which is about all he can do because his visa doesn’t allow him to play shows. So, he just gets to talk and party, all while disapproving record company lackey Ron Oberman (Marc Maron) shakes his head. Will he discover the fucking whatever, you get it, who cares?

The Problem: There’s a scene I love in this where Maron explains at length why Bowie can’t perform music, which is the movie’s way of getting around the fact that Bowie’s estate wouldn’t give this poorly conceived, living, breathing Wikipedia entry the rights to any of his music. Can you imagine making a movie about Stanley Kubrick in 1967 and not showing a single image from 2001: A Space Odyssey? (Hang on to that. It becomes relevant in a second.) I honestly think the movie should have gone further and had Maron say things like, “Oh, and these cats only wanna hear specific covers of songs with cheaper rights, so just play Scott Walker. Oh, and listen, when we’re in the car, we won’t be listening to any modern music either, so don’t even think about it. And hey, when we see The Velvet Underground at the end of Act 2, we’re only gonna catch them jamming, not playing any of their instantly recognizable hits. And listen, make sure you say the names of the few people we can say, even though they don’t ultimately matter at all on your journey to superstardom. Like tell the audience who made your dress. That’ll pad the runtime.” 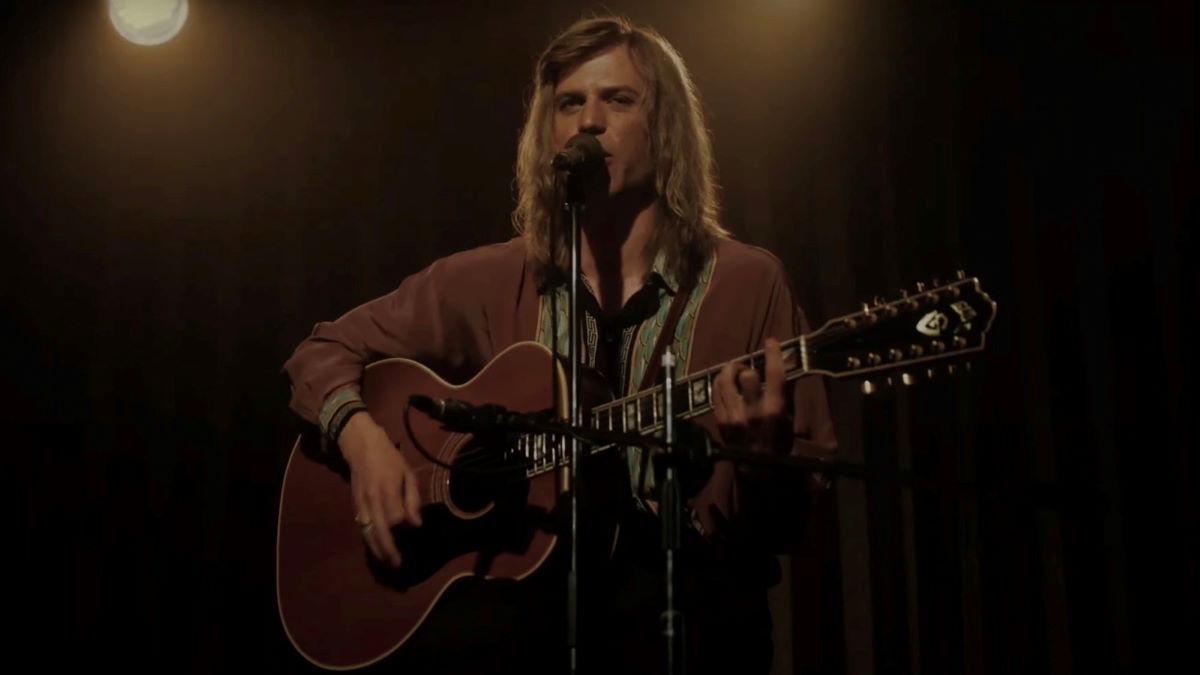 The Bigger Problem: I used to bus tables at Alice’s Tea Cup at 64th in Manhattan, and when Bowie died, I highjacked the stereo to play the Ziggy Stardust record (about the straightest music Bowie ever recorded purely from a sonic standpoint, and I was never gonna be allowed to play Low there), and a friend of mine raised on James Taylor and Joni Mitchell was still freaked out by it and asked me to change it. She’s about the only person I could see needing to learn anything this movie is interested in teaching, and honestly, she wouldn’t like it either because it’s fucking terrible. Sure, it might endear some people to learn that Bowie got the idea for his famous personae from watching therapy sessions where his brother would pantomime singing to get his emotions out (which is … a bit literal). But in order to get that far, you’d have to not mind agonizing scenes of Bowie blowing one interview after the next. Realistic? Maybe, but absolutely deadly on the screen.

You’d also have to put up with Johnny Flynn doing Noel Fielding doing Bowie in the lead, looking gallingly dissimilar to the man, mumbling and smoking his way through an underwritten and quite unfocused impression of the young Bowie, who was never this dull, but even if he was? Film something better. I think they call that cinema. Finally, you’d have to put up with every third character saying “You’ll never be as big as that Marc Bolan!” Which really ought to play to the cheap seats considering the presumed audience for this is someone who doesn’t know a goddamned thing about English rock music in the early ’70s. Anyone who does will be too insulted to make it through the opening, which puts Bowie in the famous red space suit from Space Odyssey because it inspired Space Oddity , which for rights reasons, THIS MOVIE CAN’T EVEN PLAY! 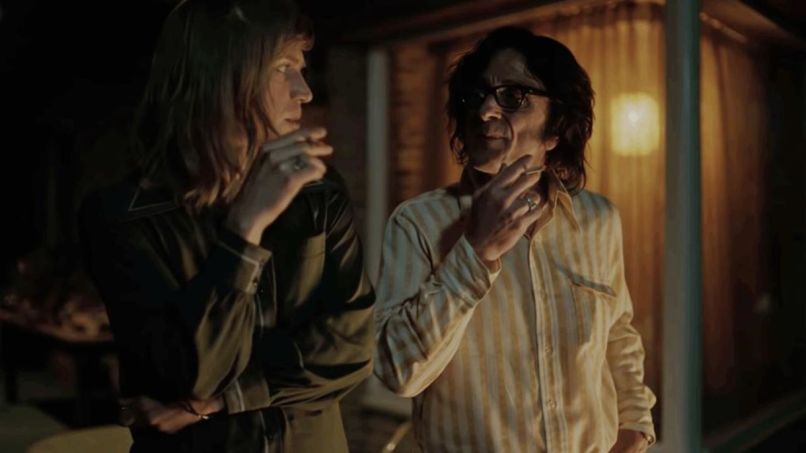 The Biggest Problem: Look, I get wanting to make movies about your heroes, truly I do. But you and I both know that that’s not why biopics are made, not anymore. If James Marsh really and truly loved Stephen Hawking, he wouldn’t have made The Theory of Everything, which doesn’t ever explain or revel in his life’s work. No, biopics get made because they make money, and more importantly, they win awards; we all know this. Actors get to do their favorite impressions, directors get to recreate iconic images and performances, which saves them the trouble of having any imagination. Album sales go up or whatever, win-win. They’re business meetings, not art.

Let’s say charitably that Range and Bell really and truly love Bowie, and this was the only way they knew how to pay homage to him. Well, Todd Haynes had the same trouble (not having the rights to his music) and he made Velvet Goldmine, which, while imperfect, is at least a real movie. This? This is set in a car. Sets cost money and blue screen car windows don’t. This casts Marc Maron because he was in Almost Famous, another movie with someone impersonating Bowie. This traps you with Flynn and Maron, who do manage about 15 minutes of empathetic chemistry, and constantly talks about people, music, and images the movie will not be showing you.

I saw this movie last Wednesday, and I still feel like I’m watching it, like its dry and stuttering dynamic hasn’t yet ended, like I’ll never hear a real Bowie song again. Someone commit me before I’m forced to don my famous alter ego, Lights Camera Jackson, to cope with my insanity.

The Verdict: Watch James Urbaniak’s recut trailer instead. It’s shorter and funnier. And for the love of god, If you love your artists, I beg of you, just listen to their albums. Don’t do this to them. You’d be better off drawing caricatures of them and selling them on the boardwalk. That interaction is over in 10 seconds. Like the voices in movie Bowie’s head, this movie is still playing in mine. It may never end.