Why scientists are talking about viral load and the delta variant 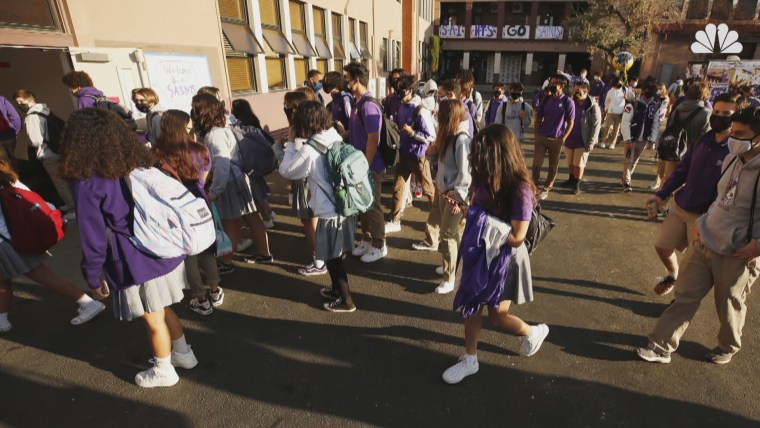 The delta variant of the coronavirus, now the most common strain circulating in the United States, is causing cases of Covid-19 to surge across the country. Key to the variant’s dominance is its supercharged transmissibility, driven in part by how the mutated virus behaves in the body after infection.

The delta variant is thought to be the most contagious of all the known variants to date, with research suggesting it’s more than twice as transmissible as the original strain of the coronavirus. What sets delta apart, experts say, is how much virus is produced by those who are infected — a measure known as viral load.

“We’ve seen through testing that people infected with the delta variant have more virus in their samples than people who had any other subtype of the virus,” said Susan Butler-Wu, a clinical microbiologist at the University of Southern California. “That’s a large part of what’s going to account for this enhanced transmissibility.”

Viral load is a term that refers to how much virus is present in the body. A study conducted by Chinese researchers that has yet to be peer-reviewed found that people infected with the delta variant had viral loads that were up to 1,260 times higher than the viral loads of individuals infected with the original strain that circulated in 2020.

Research is ongoing, but the findings, which were posted July 12 to the preprint server MedRxiv, help explain why the delta variant has been linked to big clusters of infection and how it has spread so rapidly around the world.

“Patients with higher viral loads are more likely to pass the virus on to other people,” said Dr. Randall Olsen, medical director of the Molecular Diagnostics Lab at Houston Methodist hospital. “Also, the higher the viral load, the sicker the patient generally is.”

The significantly higher viral loads observed by Chinese scientists seem to support other research that has focused on the delta variant’s increased transmissibility. Public health officials in the United Kingdom, where the delta variant fueled a new wave of infections in early June, said the variant could be 40 to 60 percent more contagious than the alpha variant, which was previously the dominant strain.

One way to approximate viral load through testing is to look at what’s known as cycle threshold, or Ct, values. The most accurate tests involve collecting a sample from the nose or upper part of the throat with a swab. The tests use a method called polymerase chain reaction, or PCR, to detect genetic materials — bits of viral RNA — that are present in the body when the virus is active.

In a lab, the collected sample undergoes multiple cycles of a process called amplification. This involves making millions of copies of a piece of the virus’s genetic material so that even a small amount of virus can be detected if it is present in the sample. Scientists can repeat this process for up to 40 cycles per test. The Ct value refers to the cycle number where a sample turns from negative to positive.

“It’s an inverse relationship, so a low Ct means there’s a lot of virus and you’re able to get a positive result earlier in the test,” Olsen said.

As such, Ct values have sometimes been used as a proxy for viral load and transmissibility, but Butler-Wu said it’s not an accurate gauge.

“There’s no such thing an infectiousness test for Covid,” she said. “The problem is that the discussion around Ct values has been very oversimplified.”

In an internal document that leaked last week from the Centers for Disease Control and Prevention, the agency presented data, some of which were preliminary, on the delta variant and instances where fully vaccinated individuals were infected. The CDC investigation looked at delta infections among vaccinated and unvaccinated people and found that specimen Ct values were similar for both groups.

The internal CDC presentation concluded that, “breakthrough infections may be as transmissible as unvaccinated cases.”

But people shouldn’t infer infectiousness from a Ct value, said Dr. Krutika Kuppalli, an infectious disease physician and an assistant professor at the Medical University of South Carolina.

“There is a relationship between Ct values and the amount of virus in the specimen, but they’re not always equivalent,” she said. “In other words, you can correlate a Ct value with viral load, but not always.”

That’s because the quality of a sample can affect Ct values, in addition to when a person was tested in the course of their infection, Butler-Wu said.

“So many things vary and can impact a Ct value, so all we can safely say is that it’s a snapshot in time,” Butler-Wu said.

While the CDC’s findings indicate that vaccinated people who get infected with the delta variant may be able to spread the virus as easily as unvaccinated individuals, vaccines have been shown to protect the vast majority of breakthrough infections from serious illness, hospitalization and death.

But beyond Ct values, studies have found characteristics of delta and the disease it causes that suggest this variant belongs in a league of its own.

The Chinese researchers who studied viral loads in people infected with the delta variant also observed that the incubation period with delta patients was shorter compared to the original strain. With previous variants, the virus was detectable in infected individuals an average of six days after exposure, but with the delta variant, that window was shortened to four days.

The change in incubation period could indicate that the delta variant is better able to invade cells and can replicate faster than previous variants, which can help the virus spread. The shorter window also makes contact tracing even more of a challenge for public health departments that are already overburdened.

More research is needed, but there are also indications that the delta variant may cause more severe disease. A study published June 14 in the journal The Lancet examined the impact of the delta variant in Scotland, where it was the dominant strain. The researchers found that the risk of hospitalization from Covid-19 was roughly doubled for patients infected with delta, compared to people infected with the alpha variant, which was previously the dominant strain worldwide.

Still, experts say there is much to learn about the highly contagious delta variant, including how it affects children and whether it causes more severe long-term symptoms. The severity of delta-driven outbreaks reinforces the need for people to get vaccinated and double down on mitigation measures to slow the virus’s spread, Olsen said.

“We need to keep hammering home that people need to get vaccinated if they haven’t already,” he said. “That’s how we’re going to protect ourselves, and eventually that’s how we make our way out of this pandemic.”