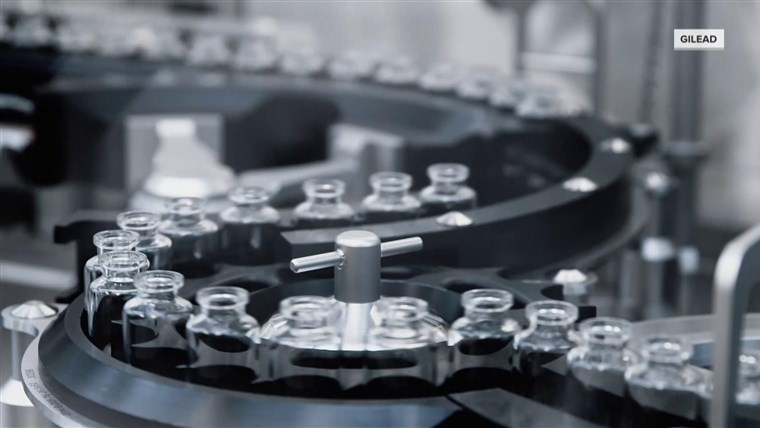 An inhaled form of interferon — a drug commonly used to treat multiple sclerosis by injection — may help protect hospitalized Covid-19 patients from getting worse, according to a British drugmaker.

Results were first released in July, but were published Thursday as a peer-reviewed study in The Lancet Respiratory Medicine.

The body naturally releases interferon when faced with an invader of some kind, such as a virus or other pathogen. Like the name suggests, it works by interfering with viral replication. Some researchers have suggested that Covid-19 patients tend to have a deficiency of interferon, especially in their blood and lungs.

In theory, boosting levels of interferon in the body would help patients fight off illnesses, such as Covid-19.

Indeed, a study published in May suggested that the coronavirus tends to inhibit the body’s natural interferon response.

A previous trial, called Solidarity, found that an infusion of the drug did nothing to reduce Covid-19 deaths or aid patients in recovering faster.

The new study from Synairgen, a drug company based in the U.K., used an inhaled type of interferon, called interferon beta-1a (SNG001). In this case, the drug is delivered directly to the respiratory tract.

The study was small, including just 98 patients, who were ill this past spring. About half received the actual drug every day for up to two weeks. The rest got a placebo. Researchers followed their progress for one month.

The study authors wrote that the interferon group “had greater odds of improvement and recovered more rapidly from SARS-CoV-2 infection than patients who received placebo.” SARS-CoV-2 is the virus that causes Covid-19.

Those who received the drug were twice as likely to improve by day 15 or 16.

Interferon “may have the potential as an inhaled drug to restore the lung’s immune response and accelerate recovery from Covid-19,” study author Tom Wilkinson of the University of Southampton in the U.K. wrote in a media release. That is, the drug may work better if it’s delivered directly to the lungs, rather than through the bloodstream.

“If I give you an injection of interferon, and you get a minuscule amount on the lungs, it’s like I didn’t give you anything. You wouldn’t expect there to be a benefit,” said Dr. Hugh Cassiere, director of critical care services for Sandra Atlas Bass Heart Hospital at North Shore University Hospital, part of Northwell Health, on Long Island, New York. Cassiere was not involved in the studies of inhaled interferon.

But, he added, when you put that drug into a form that can be inhaled, “and you get direct deposition into the lung tissue, you can get very high levels of the drug. If the drug works, you’d expect there to be some benefit.”

Researchers caution the study was too small to make any definitive statements about the potential benefits of inhaled interferon, or tease out any potential side effects. Inhaled forms of interferon are not approved for use in the U.S.

In IV or injectable forms, interferon can cause flu-like symptoms, joint pain and fever.

In a commentary accompanying the study, Nathan Peiffer-Smadja from Assistance Publique – Hôpitaux de Paris, France, pointed out that the timing of interferon administration could be crucial. Immune responses can be beneficial early in the course of illness, but could also exacerbate an illness later on.

It’s clear that a hyper-inflammatory response in some Covid-19 patients is detrimental, described as a “cytokine storm.” Indeed, interferon is a cytokine. Peiffer-Smadja, who was not involved with the new study, wrote that there is a need “to study whether there is an impact of interferon beta-1a on prolonged symptoms, especially pulmonary.”

If the results are confirmed in larger trials, the drug could provide a major benefit amid an out-of-control pandemic that’s overwhelming hospitals nationwide.

The researchers are now testing the inhaled interferon in Covid-19 people who are not sick enough to be hospitalized.

“If this preliminary data holds up,” Cassiere said, “then this therapy can decrease patients having more advanced disease and winding up in my ICU.”