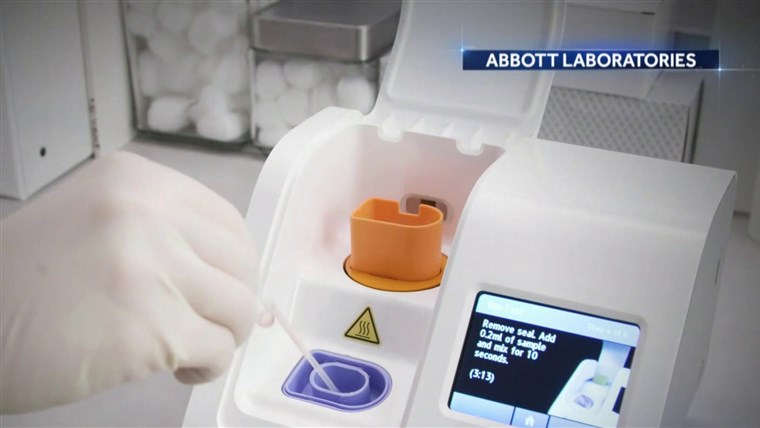 The federal government is pushing back on an order from Nevada’s department of health to suspend rapid Covid-19 tests in nursing homes — suggesting the decision “can only be based on a lack of knowledge or bias,” according to a letter signed by Dr. Brett Giroir, assistant secretary for the U.S. Department of Health and Human Services.

The move comes one week after the Nevada Department of Health and Human Services mandated that long-term care facilities in the state stop using two Covid-19 antigen tests that had been supplied by the federal government.

State health officials in Nevada said the antigen tests, which can deliver results within 15 minutes, had an unusually high number of false positives. That indicates a person is infected when in fact he or she is not.

Covid-19 antigen tests are designed to detect certain proteins on the surface of the coronavirus. More sophisticated tests — called PCR tests — look for the virus’s genetic material in a sample. These are more accurate, but can take up to three days to get a result.

The federal government began rolling out the antigen tests, made by Quidel and Becton, Dickinson and Company, to nursing homes nationwide in August.

Quick results are important, because “nursing homes have accounted for as much as 40 percent” of the overall Covid-19 deaths in the U.S., Giroir said Friday on a call with reporters.

But within a month of that test rollout, the Nevada department of health said it began to receive “anecdotal reports” of false positives. By October, health officials in the state determined the rate of false positives was 60 percent.

That’s a major problem, said Dr. Michael Wasserman, president of the California Association of Long Term Care Medicine. “If you have a large number of false positives, it will throw your facility into complete chaos and panic.”

On Oct. 2, health officials in Nevada sent a letter to its nursing home facilities advising them “to immediately discontinue the use of all Covid-19 point of care (POC) antigen tests until the accuracy of the tests can be better evaluated.”

Part of the issue relates to staffing, which is already a stretched resource at many nursing facilities.

Indeed, the tests were meant for workers inside nursing homes, including possible asymptomatic staffers.

“This is obviously necessary to keep an unaware infected individual from coming into a nursing home, and starting a potentially devastating outbreak,” Giroir said. He added that if an individual does have a false positive, it would be detected by a PCR test within 48 hours, and the person could return to work. (The Centers for Disease Control and Prevention recommends that positive antigen tests are confirmed with a PCR test.)

But Wasserman said the false positives can decimate a nursing home’s staff.

“You already have people who you sent home because they have Covid. If all of a sudden you get 10 staff members who test positive, but they’re false positives, you can’t replace them,” he said. “You don’t have any other staff to take care of your residents.”

But Giroir said long-term care facilities should continue using the tests. “There is no scientific reason to not comply with this,” he said, adding that Nevada’s suspension of those rapid tests is “not justified and not scientifically valid” and will “endanger the lives of our most vulnerable.”

Giroir suggested HHS could take “swift action” against the state, but did not elaborate on what, if any, punishment might follow.

The Nevada Department of Health and Human Services had not responded to a request for comment Friday afternoon.