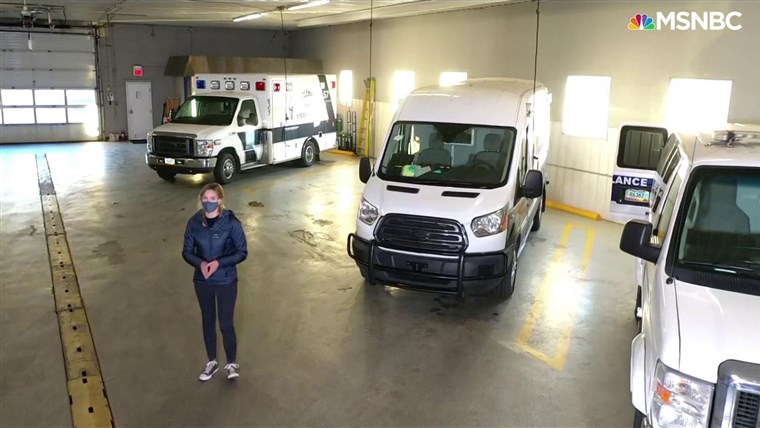 During the height of the pandemic, a quiet financial crisis was brewing for ambulance companies.

As hospitals became overwhelmed and patients begged not to be taken to crowded emergency rooms for fear of potential infection, paramedics and emergency medical technicians began treating patients where they met them — outside homes, alongside roadways, in parking lots.

The trouble is that ambulance companies are only paid to transport people, not for treating them.

Now, an aid package in the American Rescue Plan and a new federal health care program could provide a financial lifeline for ambulance companies and herald a permanent shift in emergency medicine as a whole.

The attempt to reimburse ambulance companies began with a bill introduced by Sens. Catherine Cortez Masto, D-Nev., and Bill Cassidy, R-La., but the legislation was ultimately rolled into the $1.9 trillion Covid relief bill. Cortez Masto voted for the plan, and Cassidy did not.

“Our first responders have gone above and beyond in caring for patients during the pandemic, and it’s just wrong that ambulance companies weren’t getting paid unless they took patients to the hospital,” Cortez Masto said.

That piece of legislation could result in hundreds of millions of dollars of relief, depending on the decision made by Xavier Becerra, whom the Senate confirmed Thursday as health and human services secretary.

Advocates for ambulance companies have negotiated with Congress for nearly a year to get this aid.

“It became a real difficulty for some services to keep the doors open and have the PPE and provide the services that their own employees needed,” Kathy Lester, a lobbyist for the American Ambulance Association, said, referring to personal protective equipment. “Finally all of the stars aligned, and we were able to find this opportunity in the American Rescue Plan.”

Empress EMS in New Rochelle, New York, experienced much of this early in the pandemic, treating thousands without reimbursement. The state’s treatment protocol essentially told ambulance companies to avoid taking patients to the hospital unless absolutely necessary.

Some ambulance services, like Empress EMS, said they had seen 30-40 percent of their emergency call volume shift to these treatment-in-place responses, according to the American Ambulance Association. Overall, there was a 12 percent increase nationwide, which has meant a huge financial burden for ambulance companies.

“We did that at our own cost because it was the right thing to do,” Hanan Cohen, Empress EMS business director, said. “We wound up doing several thousand treatments in place during the peak Covid period of March, April and May with no revenue against it.”

The Centers for Medicare and Medicaid Services started an experimental program that wouldn’t quite standardize treatment-in-place, but it would provide ambulance companies and patients more options before taking a costly trip to the emergency room. Delayed by the pandemic, the new program started in January with 205 ambulance services participating.

Known as the Emergency Triage, Treat and Transport model, the Medicare program is a five-year pilot in 36 states and Washington, D.C., that would allow ambulance companies to transport patients to their primary care doctor or an urgent care clinic in an attempt to reduce the burden and the costs of the emergency room. The paramedics or EMTs at the scene of an accident or a health emergency can also provide treatment alongside a doctor calling in through telehealth.

“It’s a high value service that overall reduces what insurance companies have to spend, decreases the patient’s copays and deductibles,” Cohen said, “and that’s all value to the health care system by reducing costs.”

The Regional Emergency Medical Services Authority, also known as Remsa, in Reno, Nevada, acted as the guinea pig for this type of program beginning in 2011. With a $10 million grant, it expanded services to include in-home treatment and care, a nurse health line patients could call for medical advice, and patients could be taken to their primary care doctors or urgent care clinics.

Over four years, they reported more than $9 million in savings for their community by reducing the number of emergency room transports necessary.

“You’re sending people the most expensive resource that has to be ready 24 hours a day, and 30 percent of the patients we respond to every day need either first aid or less than first-aid level care,” said Adam Heinz, Remsa’s director of integrated health. “So, for us, the question was how do we preserve resources for emergencies when the child is choking, when grandma has a heart attack, when somebody is drowning, and be able to provide a quick response and trained and clinically competent people while also filling the gap of being a safety net?”

Members of the ambulance community said it is a hard-won lesson illustrated through the pandemic and a possible silver lining after a year of health care woes. At this point, many said they are cautiously optimistic, but they are also waiting to see what private insurance companies decide to do.

The fear is that memory may become short-term.

“These are massive steps forward, and we hope they stay in place over time,” said Remsa CEO Dean Dow. “We can’t just keep burying our heads in the sand and refusing to make the tough decisions to change. That’s not the route we can afford to go down.”