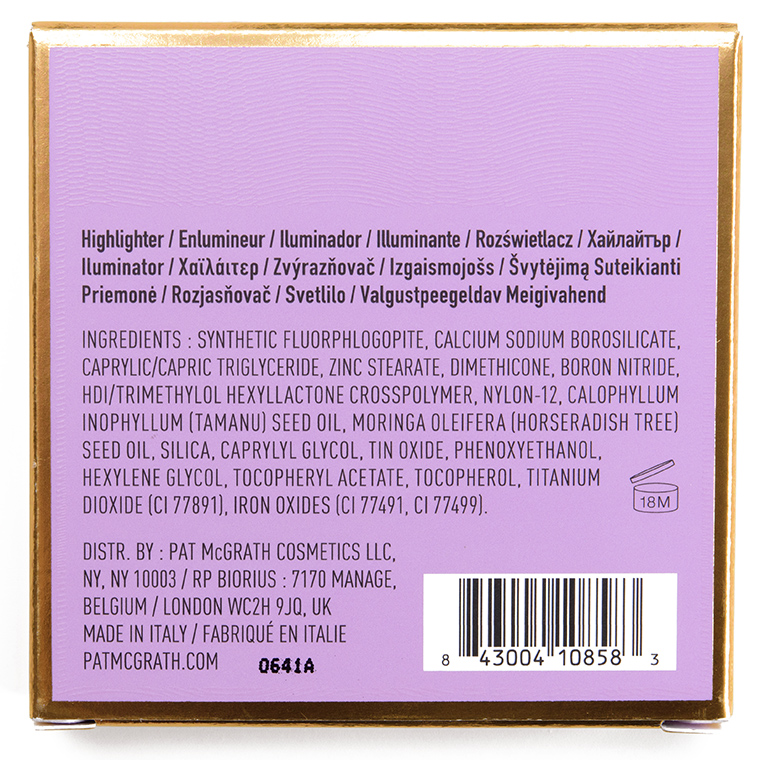 Pat McGrath Golden Nectar Divine Glow HighlighterPat McGrath Golden Nectar Divine Glow Highlighter ($48.00 for 0.16 oz.) is a light-medium peach with a slightly darker peach base paired with a shiny, reflective finish that was metallic but not prone to emphasizing my skin’s natural texture. The color appeared to have some depth to it as at certain angles, the darker base was more visible, which gave it a more highlighting blush effect on my skin tone.

The powder had semi-opaque, buildable color payoff with a smooth, almost wet-like texture that was more firmly-pressed into the pan, thin (but not in a bad way), and blendable. I didn’t have any issues picking up product with a typical, tapered highlighting brush, and I found it easy to apply and blend out. It wore well for nine hours before fading slightly.

FURTHER READING:
Formula Overview
for details on general performance and characteristics (like scent).

The formula is supposed to have an “ultra-reflective finish” and “silken feel” to give a “high intensity glow.” The texture felt more emollient, almost wet to the touch, though it was distinctively a powder-based formula in practice.

It had mostly opaque, buildable color coverage with a very thin, lightweight texture that applied evenly to bare skin and blended out with ease. The finish was “high intensity” but didn’t emphasize my skin’s natural texture. It wore well for eight and a half hours before fading a bit.

Browse all of our Pat McGrath Divine Glow Highlighter swatches.

We’re here to help you make better beauty purchases that you’ll enjoy and love! We recommend signing up to take advantage of personalized features like tracking products you own, viewing dupes that you already have, and more!

Here are some useful resources for you:

Curious how two shades compare to each other? Type in the shades below to get instant side-by-side swatches!