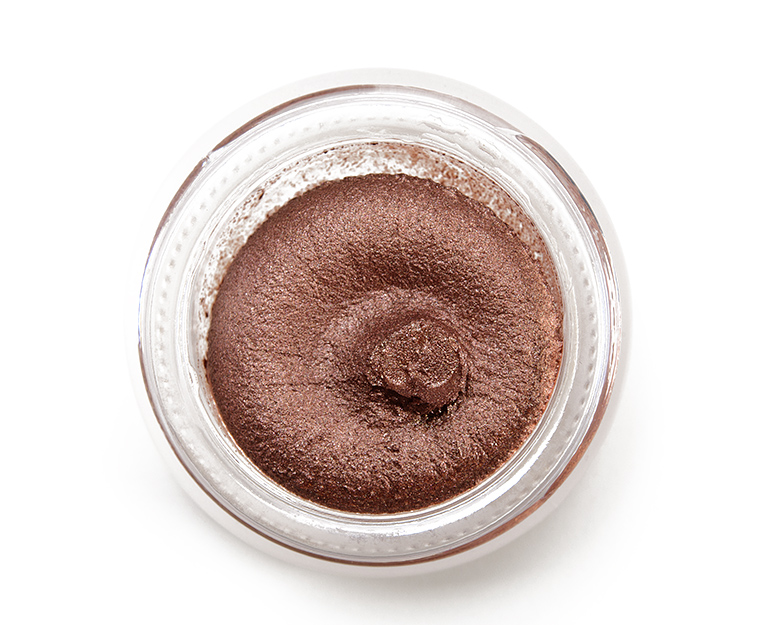 Auric Temper Smoke Reflect Eye Shadow Duo ($39.00 for 0.23 oz.) includes a sparkling powder eyeshadow and a cream eyeshadow. The cream eyeshadow was the better performer between the two, as the texture of the sparkly eyeshadow was on the drier side and felt a little too compacted in the pan, so it wasn’t as easy to work with.

Temper (Powder) is a light, rosy copper with moderate, warm undertones and flecks of glitter and sparkle throughout. This shade contained plastic (PET) glitter along with sparkle (the other shades in this formula did not contain plastic glitter). It had semi-sheer, buildable pigmentation but was best applied with a dampened brush due to the drier, firmer texture. The texture seemed to get more compacted over time rather than loosening or getting more forgiving, unfortunately.

It felt too-firmly pressed into the pan, which resulted in a product that was harder to pick up with a dry brush and seemed more reactive to natural oils on the fingertips, which is why a dampened brush seemed to be the best course of action. The surface hardened a bit after a few uses with fingertips in particular. It applied fairly evenly to bare skin, but it was more prone to fallout than other shades in the line, especially when I went to diffuse/blend out the edges. It lasted for eight hours but had light fallout over time.

It is supposed to be a “light-reflecting” eyeshadow with “high-shine pearls” that can be used alone or as a top coat. The brand describes them as having “micro-glitter,” though only one of the shades reviewed contain plastic (PET) glitter.

They had more translucent bases, which was as described, but there was a lot of sparkle/shimmer, so the result was more medium to opaque, depending on the shade. The consistency was slightly drier, more firmly-packed into the pan overall with more of a glide than a denser, thicker silicone-like feel (like some more intense metallic formulas these days). One shade was noticeably drier/more firmly-pressed to the point where it seemed to impact the application/coverage relative to the other two shades.

They applied with minimal fallout and had good adhesion on bare skin, but they are best applied with a fingertip or a dampened brush with a pressing/patting motion for the most minimal fallout and the most even lay down of product. I found that I had to be careful blending out the edges with a fluffier, drier brush as fallout was more likely to occur then. They lasted around eight hours and had light fallout over time.

Based on the line-up at review, they should work alone, as more of a sheer wash of sparkle, as well as more packed on as a standalone powder eyeshadow or patted over the coordinating cream eyeshadows they sit on top of.

Browse all of our Auric Smoke Reflect Glitter Shadow swatches.

NOTICE: All products categorized under “Glitter” contain Polyethylene Terephthalate, also known as plastic or PET glitter, and it is typically cosmetic grade glitter. Inclusion of this ingredient sometimes carries a warning (in the US) that the product is “not intended for use in the immediate eye area.” This ingredient has not been approved for usage on the eyes per the FDA. In recent years, some brands are including this product in their eyeshadows without any warning or callout and effectively marketing them as eyeshadows or including a symbol of an “eye” which suggests eye usage. Via CosIng for EU, PET glitter is permitted without any restrictions or limitations. For an in-depth look at whether cosmetic grade glitter is safe, please view this post.

Temper (Cream) is a light-medium, rosy bronze with warmer undertones and a smooth, pearly sheen. It had opaque color coverage that could be sheered out (or used with less product) evenly. The consistency was lightweight, mousse-y in the pot but had good glide and adhesion without losing its intensity.

It had more play time than some cream eyeshadows, so it did seem to pull into my lines along the inner lid area (though not so much my crease) as it was drying down and I had to smooth it back out as it was drying down. Once I did that, though, I didn’t get additional creasing/settling until after eight and a half hours of wear.

It is supposed to be “smooth, longwear[ing], [and] creaseless” cream eyeshadow. The texture was a cross between a traditional cream eyeshadow (which can feel wetter and thinner) and an airier, more whipped mousse. It was an intensely pigmented formula where one did not need a lot of product to get an even layer of product on the eye.

They had a moderate dry down time; they did dry down to a more powder-like finish that wasn’t budge-proof–I could still soften the edges a bit–but had a tendency to settle into my fine lines on the inner lid area as it was drying down, so I had to buff the product back out to even the product out. Once I did this, it didn’t keep creasing after the dry down. If I applied and buffed out the product as a sheerer layer of product, then this wasn’t an issue as less product was more apt to dry down fairly quickly compared to a more opaque layer of product.

The consistency dried down but wasn’t thick, heavy, or inflexible, so it paired well with other powder eyeshadows (not just the one included with it) and could be used as an eyeshadow base or eyeliner as well. Aside from the initial creasing (which I could blend/buff out) as it was drying down, once it dried down, I didn’t get creasing until the eight to nine hour mark.