What it’s like driving across the new Irish trade border 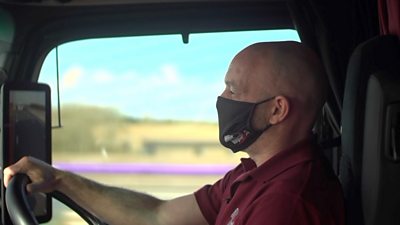 The ferry operator, Stena Line, says Brexit is still causing significant distortion to trade volumes over the Irish Sea, three months since the UK’s separation from the EU.

One of the most contentious aspects of the deal was the introduction of new checks between Great Britain and Northern Ireland. Figures obtained by the BBC show that exporting goods over the Irish Sea now costs an extra £50 to £350 per pallet. It can also add an extra four hours turnaround time per lorry.

The BBC’s Ireland correspondent Emma Vardy travelled with a lorry driver over the Irish Sea, to see first-hand how the new arrangements are having an impact.