Home Business Pret A Manger to cut 3,000 jobs in the UK 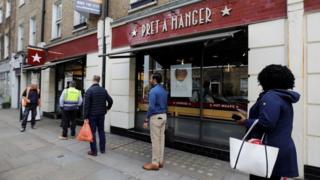 Sandwich chain Pret A Manger is to cut 3,000 jobs, or more than a third of its workforce, as part of a plan to save the struggling business.

The jobs will mainly go at its stores, but 90 roles will also be lost at its support centre.

It follows a decision earlier this summer that 30 Pret stores across the UK would close permanently.

The firm has been hit as demand from commuters and office workers – a key market – has plunged in the pandemic.

Boss Pano Christou said he was “gutted” to lose so many colleagues.

“Although we’re now starting to see a steady but slow recovery, the pandemic has taken away almost a decade of growth at Pret.

“We’ve managed to protect many jobs by making changes to the way we run our shops and the hours we ask team members to work.

“I’m hopeful we’ll be able to review all these changes now that trade is improving again.”

Like other retailers, Pret was forced to close for several months during lockdown, but while restrictions have eased, its trading has remained subdued.

It 367 UK stores are now open for significantly fewer hours than they were before the pandemic, and the firm has asked staff to reduce their hours.

The firm said its weekly sales were around £5.2m in August, less than what they were in August 2010, when the business was considerably smaller.

However, it said its recovery was “clearly underway”, with sales having grown by 7% each week since July.

The firm had warned it would cut 1,000 jobs back in June, but that number has risen after it finalised a restructuring deal this week.

The firm is the latest hospitality company to announce cuts due to the impact of the pandemic.

Upper Crust-owner SSP Group says up to 5,000 jobs could be cut across its UK outlets and head office, as it struggles with the reduction in passenger travel at railway stations and airports.