Lockdown for a second time: ‘It can’t get any worse’

Home Business Lockdown for a second time: ‘It can’t get any worse’ 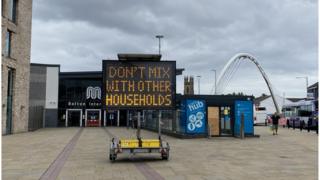 A delicious smell of homemade pies wafts through the Thomas Egerton pub in Bolton.

A strange sensation given the pub is resoundingly closed, the tables stacked with chairs.

Publican Josh Lee is trying to make the best of a bad situation.

After just two months of “heaven”, being open after the national lockdown, he had to shut his doors as all hospitality venues in the Bolton area were closed this week.

He has re-furloughed his staff, keeping just himself and the head chef Robert Nelson in their small kitchen.

He’s hoping the new takeaway menu and this two-man band can keep the pub ticking over.

“It can’t get any worse can it?” he laughs ruefully. He believes this pub will probably survive, but its sister pub round the corner will not.

The new local lockdown restrictions mean most of the pubs and restaurants in the centre of Bolton are closed.

The Elephant and Castle is a lone venue selling beer from a trestle table outside its front door, and there is a Greek restaurant with plastic screens in the entrance looking hopefully for takeaway customers.

Many told us that the High Street was depressed before the coronavirus hit. The new restrictions have just made it worse.

“Going out should be utopian”

It’s these sorts of closures that businesses in other parts of the UK fear.

“This is a classic example of people trying to get round the rules.” Jimmy Pratt, the manager of the Next Level bar in Halifax, waves a booking form at me.

“Chloe – she reserved for six – now she wants to add another two tables of four. We can do it, sure, but we’ll have to split them up into different areas around the bar”.

Here in West Yorkshire, restrictions have been in place since the end of July.

They stop people socialising from different households inside homes and public venues such as bars and restaurants.

The same sorts of restrictions that have just been introduced in Birmingham.

This has turned bar managers like Jimmy into “tyrants”, as he puts it.

He is very aware that if they don’t conform rigidly to the guidelines, Halifax could be the next Bolton.

At the same time, he’s trying to keep the bar fun.

“It’s hard to feel like you’re breathing down people’s necks. They want to enjoy the fact that they can get out of the house. When you come to a bar you’re coming to a utopia where you’re escaping the mundanity of everyday life.”

He says the number of people coming into the bar is dropping as a result, which he puts down to fear and confusion about the rules.

Local restrictions have been imposed on a sliding scale and, unsurprisingly, those areas subject to stricter measures have seen businesses suffer the most.

The hospitality and retail sectors have been hit in particular as people feel less confident about going out.

It’s a Catch-22 situation, trying to get the economy going again and encouraging people back into the workplace, while trying to prevent any spike in infection that could make local lockdowns more widespread and more stringent.

Valentin Quinio, a researcher at the Centre for Cities think tank, has analysed the impact on footfall and spending of local lockdowns.

“When, like in Greater Manchester, they’re designed to prevent households mixing, the impact on city centre footfall is only slight. But when, like in Aberdeen, they shut shops, then we can see this in the figures.”

She says this will lead to job losses in the short to medium-term “as long as people stay at home then the situation for local businesses and services in locked-down centres is very difficult”.

Shane Taylor, research and policy manager at the Aberdeen & Grampian Chamber of Commerce says: “At least one business in our membership closed permanently off the back of the local lockdown. We are concerned that further spikes and local restrictions may be the straw that breaks the camel’s back for many.”

There’s a ripple effect of local lockdowns on surrounding areas.

Leicester went into a second lockdown at the end of June, the first place to do so.

Dog-grooming business The Dog House is based just outside the restricted area.

Owners Anna Pollard and Selina West found they lost appointments when the restrictions were at their height, because people weren’t travelling from inside the zone.

There is also a lingering effect on consumer confidence, according to Yael Selfin, chief economist at KPMG. “Even in Leicester when restrictions were lifted, footfall is 20% lower than we would have expected,” she says.

Overall it is difficult to quantify the overall impact of the local lockdowns for the UK economy.

“In term of the share of the economy, locked down areas represent just over 8%, so it’s not a major part, but they will have broader implications in terms of confidence and overall consumer spending and business investment in the UK,” she says.

The government has allocated funding for those businesses affected by the restrictions.

Businesses in England that are required to shut because of local lockdowns can claim up to £1,500 per property every three weeks while small businesses will get £1,000. Businesses still locked down at a national level are not eligible.

But the director general of the British Chambers of Commerce, Adam Marshall, would like to see more.

“Companies have people on their payroll, they have rent, they have suppliers to pay and the grants aren’t going to be enough to pay the bills when you don’t have any takings,” he says.

However, Mr Lee in Bolton feels he has received a lot of support, and says that the challenge it has made him more entrepreneurial.

“It reminds me a bit of the introduction of the smoking ban. We’ve got to adapt and change what we do,” he says.