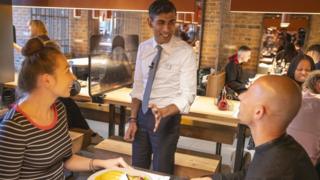 Diners used the Eat Out to Help Out scheme more than 64 million times in its first three weeks, according to the latest Treasury figures.

The scheme, which is now in its final week, offers customers in restaurants, pubs and cafes 50% off their meal per head, up to a maximum of £10.

It runs every Monday, Tuesday and Wednesday in August to encourage support for the hospitality sector.

“Today’s figures continue to show that Brits are backing hospitality – with more than 64 million meals discounted so far, that’s equivalent to nearly every person in the country dining out to protect jobs.

“This scheme has reminded us how much we love to dine out, and in doing so, how this is helping to protect the jobs of nearly two million people who work in hospitality.”

According to restaurant booking website OpenTable, the number of customers at UK restaurants between Monday to Wednesday last week was 61% higher than last year.

The Treasury said 84,000 restaurants had now signed up to the scheme, which closes on 31 August.

Eat Out to Help Out aims to help protect the jobs of 1.8 million employees in the hospitality industry by encouraging people to return to local eateries where social-distancing rules now apply.

David Page, chairman of Fulham Shore, which owns Franco Manca and The Real Greek, said: “Eat Out to Help Out immediately increased our restaurant customer numbers by over 50%, thus enabling us to get all our staff back to work. In fact, we are now creating new jobs .”

No vouchers are needed, with the participating establishment simply deducting 50% from the bill, up to the £10 per person maximum, and reclaiming the money from the Treasury.

However, the discount is only on food and soft drinks eaten on the premises, and does not apply to takeaways.

There is no limit on how many times the discount can be used in August, or for how many people, including children.

However, the scheme has faced criticism. In July, the Institute for Fiscal Studies forecast it would most likely be a “giveaway” that benefits those well-off enough to eat out.

Anti-obesity campaigners said the scheme “would be a green light to promote junk food”. And some restaurant owners were concerned the measures could pull in diners earlier in the week to the detriment of weekend trade.