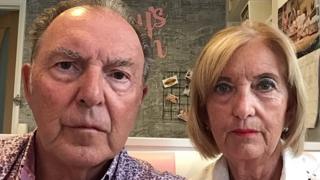 British Airways passengers have told the BBC that they have been refused cash refunds for cancelled flights.

Gordon and Margaret Minto accepted vouchers instead after their flights to the United States were cancelled, the airline says.

“We were stunned… we looked at each other and said, ‘we haven’t asked for a voucher’. We haven’t received one either”, says Margaret.

BA said it will “always provide a refund if a customer is eligible”.

But the Mintos from South Shields are among many holidaymakers who have found themselves in a stand-off with the airline after their flights were cancelled due to the coronavirus pandemic.

The airline maintains they accepted vouchers, while they all say they never wanted vouchers at all.

Under EU law, when a flight is cancelled passengers are entitled to their money back within seven days.

Airlines are still free to offer them the chance to rebook or to take vouchers, which can be used on different flights in future, if that is what a customer prefers.

The Mintos had spent £4,748 on five tickets for them and family members to fly from Newcastle via London to Dallas and Las Vegas.

They say they always wanted a cash refund but communicating that wish to British Airways was difficult.

The airline used to offer an online facility where people could request money back for cancelled flights. It called it “the quickest way” to get a refund.

But when Covid-19 struck and thousands of flights were being cancelled, that option was removed from the company’s website.

BA says it was because its system was not set up to deal with that volume of traffic, so passengers who wanted refunds were asked to ring the company instead.

The problem was many passengers then struggled to get through on the phone lines too.

The Mintos gave up and emailed BA asking for their money back. They got a reply saying, as far as the airline was concerned, they had accepted vouchers already and could not exchange them for cash.

All the more puzzling, according to Margaret, was the response they got from a BA staff member when they did manage to get through on the telephone.

“They said, ‘I’m sorry I cannot find anything on the system which shows that you’ve accepted a voucher and I am going to go to a superior and ring you back in three days’. That was the last we heard from them and that was two and a half weeks ago,” she says.

When the BBC contacted British Airways, the airline insisted Mr and Mrs Minto had filled out a voucher request form as there is “no way” in which its system would issue vouchers without one.

Yet other British Airways customers who were after cash refunds for cancelled flights are also claiming vouchers were automatically issued to them.

“In the end it seemed to me the only sensible option was to say to the customer services, ‘well show me the form which you alleged I completed’. Despite repeated requests, they will not send it to me. I can only assume it’s because it doesn’t exist. I’m totally disenchanted with them. It is a pathetic piece of obfuscation on their part.”

Other customers say they filled out voucher application forms by mistake after logging into their accounts looking for ways to get their money back.

At one stage the BA website displayed two buttons, one labelled “change booking” and the other labelled “cancel booking” with a message underneath which said: “There’s no extra cost for any changes and we offer a refund if you cancel your booking”.

People who clicked “cancel booking” hoping for a refund were actually taken to an application form for vouchers.

It had “Future Travel Voucher Application Form” written in large letters at the top and a box to tick at the bottom acknowledging acceptance of vouchers, but several people seem to have missed that.

David Hunter from Sutton in Surrey says he got “suckered in” by the previous page which promised a refund and filled out the form thinking that was what he was getting. He only realised his error after pressing submit and, within the hour, managed to get through to British Airways on the telephone.

“British Airways said ‘no, that’s it, that is what you selected that’s what you’re getting,” he says, meaning he’s stuck with a voucher for his £768 return flights to Seychelles.

David Travers, a barrister specialising in trading standards and consumer protection law, believes the fact that a number of people have been misled does “rather suggest” that the British Airways website was misleading.

“There is something unattractive, people might think, about a large commercial concern playing ‘gotcha’ with a customer – if you read that more carefully you would have realised what we were doing.

“That is something the courts and the legislation have taken some trouble to treat with a degree of caution because of the inequality of the position between the consumer and the business,” he says.

BA says the voucher process is clearly worded but has failed to explain why part of its website appeared to offer a refund but took people to a voucher application form instead.

The regulator, the Civil Aviation Authority, says if consumers feel misled then they should open a complaint about their experience, first with the airline and then, if they are not satisfied with the response, they can seek redress via the approved alternative dispute resolution service, which in the case of British Airways is the Centre for Effective Dispute Resolution (CEDR).

“We will always provide a refund if a customer is eligible and we’re offering flexibility if any of our customers need to change their flights,” British Airways said in a statement.

“Since March we have provided more than 1.67 million customers with cash refunds and more than 1.3 million with vouchers to fly with us that they can use right up until April 2022”.