The Papers: Results “fiasco” and new UK quarantine for France 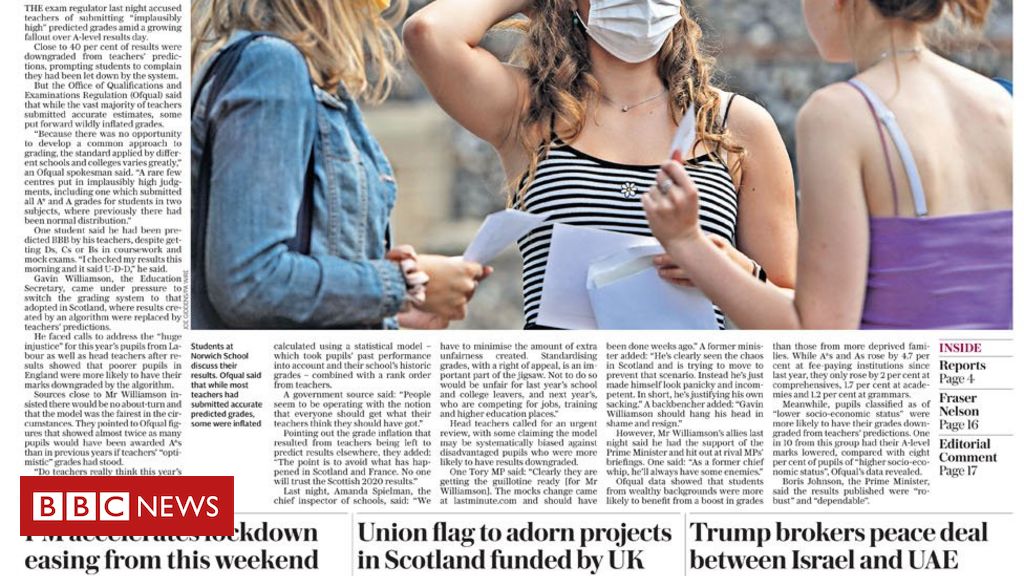 The anger surrounding yesterday’s A-level results is reflected across the papers.

The Daily Star depicts Boris Johnson and the Education Secretary, Gavin Williamson, as “A Grade Clowns”, in front of a blackboard which has the line “I must do better” written on it several times.

The Metro grades the government “A Big Fat F for Fiasco”; the i newspaper believes Mr Williamson – and his Scottish counterpart, John Swinney – should stand in the corner, wearing a dunce’s hat; while the Sun regards the whole affair as “Grade A Chaos”.

The Daily Express sympathises with a generation whose “schooling was derailed by the pandemic” and who will “fear their future has now been dealt a mighty blow”.

The Daily Mail accuses Gavin Williamson of failing to do his homework – and suggests “expulsion from the cabinet” may be “the least he deserves”.

The Daily Mirror says the government “is wide open to charges of championing the privileged few over the mistreated many” – and says the marking down of so many students “means that instead of levelling pupils up, they are held back”.

The Guardian says the Equality and Human Rights Commission is considering using all its powers to intervene, and ensure disadvantaged children are treated fairly – in particular, those who are disabled or from minority ethnic backgrounds.

The paper adds that students are being urged to join a possible legal action against the exam regulator Ofqual and the Department for Education.

A government source points to figures which suggest that using teachers’ “optimistic” predictions would have meant almost twice as many pupils being awarded A*s than previous years – and asks: “do teachers really think this year’s cohort at the top end is nearly twice as bright?”

But amid the disappointment, the Times reports that a record number of disadvantaged students have won places at university. In England, twenty-thousand eighteen-year-olds from poorer backgrounds have been accepted, amounting to almost nineteen per cent of their age group.

According to the Times, a former Pizza Hut delivery driver – who began a fitness clothing firm in his parents’ garage while at university – is about to become Britain’s richest self-made person under thirty.

Ben Francis’ company, Gymshark, is said to have been valued at more than a-billion pounds in an investment deal by a private equity firm. It says the agreement would put his personal wealth on a par with the singer, Ed Sheeran, and the footballer, Gareth Bale.

When the racehorse He Knows No Fear was given odds of 300-1 on his second outing at Leopardstown, the Daily Telegraph says he was so unfancied that not even his owner bothered to bet on him.

The paper says the property billionaire Luke Comer was despondent after the horse “floundered on his debut” and failed to even attend the next race.

But he was said to be “thrilled” when the rank outsider beat the favourite by a nose to become the longest-priced winner in the history of the sport in Britain and Ireland.

As travellers to France learn they will need to quarantine on their return from tomorrow, the Daily Express says the measure is part of a “ruthless” bid by Boris Johnson to prevent a second spike of coronavirus.

But the Daily Mail warns that “the curbs will heap fresh misery on airlines and tour operators and signal a death knell for foreign holidays this summer”.

The Times predicts “a scramble to book trains, ferries and flights home” before tomorrow’s four am deadline.

The Sun reveals that seats on a British Airways flight from Charles De Gaulle airport to Heathrow quadrupled in price after the government’s announcement.

The Sun also welcomes the news that football fans will be allowed to return to stadiums next month – describing them as “the lifeblood of the game” whose absence has been keenly felt.

It says spectators will be made to sign up to a new code of behaviour – and “will likely be urged not to chant or shout for fear of spreading the virus”.

The number of callouts to “non-fire incidents” has risen by more than a third in five years. The Fire Brigades Union says there’s been a “significant increase” in flooding emergencies, leaving its members “battling the sharp end of climate change”.

For generations, artists have been inspired by the beauty of the Lake District. Now, the Times reveals, the pop star Taylor Swift has fallen for its charms.

A bonus track on her new album is said to be dedicated to the national park, which she visited in 2012.

The Lakes features the lyrics “Take me to the lakes where all the poets went to die/ Those Windermere peaks look like a perfect place to cry”. It even, says the paper, includes a pun about Wordsworth.