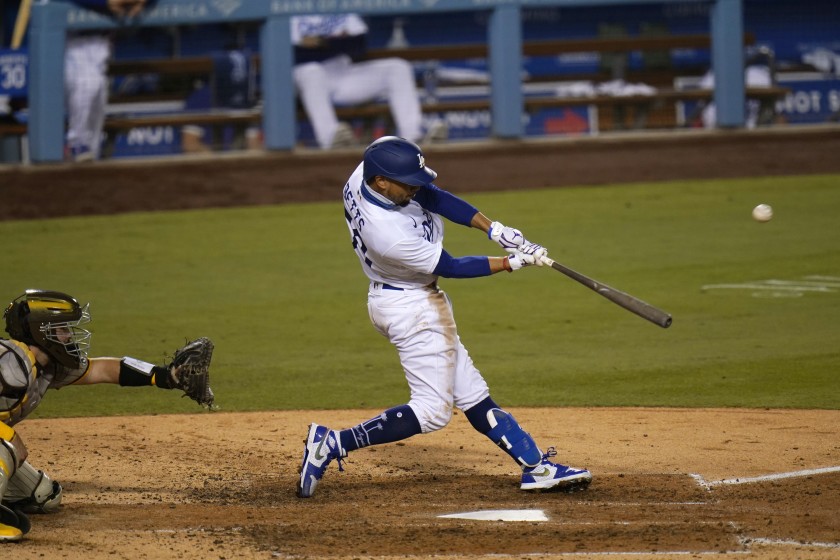 Mookie Betts didn’t get a chance to swing in his first at-bat Thursday night, getting hit by a pitch in his return to the leadoff spot.

His next three times up, the Dodgers right fielder made sure not to miss.

Betts went deep in the second, fourth and fifth innings of the Dodgers’ series finale against the San Diego Padres, fueling the team’s offensive outburst with power to all fields. He singled during his fifth plate appearance in the seventh inning.

His first big fly came against Padres starter Chris Paddack, an outside fastball he drove the other way to right-center field. In the fourth, he jumped on a high fastball from Luis Perdomo for a two-run blast that cleared the fence in left-center. And when an overturned double-play extended the Dodgers’ threat in the fifth, Betts clobbered another two-run shot into a collection of cardboard cutout fans in the first few rows of left-field bleachers.

It was Betts’ first multi-home-run game as a Dodger, and his first three-homer outing since July 26 of last season, when he tripled up the New York Yankees at Fenway Park as a member of the Boston Red Sox.

Betts, who was hitting at the top of the order for the first time since Aug. 2, now leads all Dodgers hitters with seven home runs on the season. His 15 RBIs match Justin Turner for a team-high.