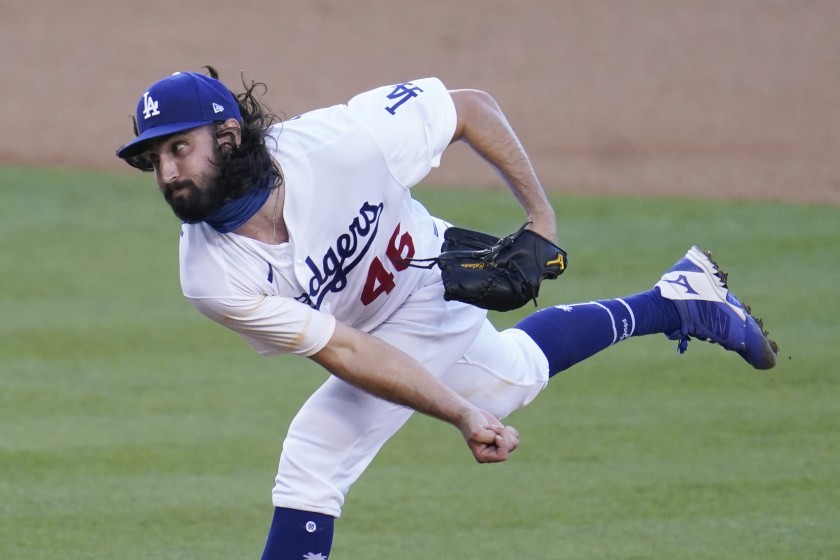 The Dodgers technically played their 19th game of the 2020 season Wednesday. But the stakes were higher than that number suggests. Each game weighs more in this 60-game race to the postseason. And the Dodgers, looking to avoid a third straight loss to a budding contender, operated with an urgency not seen in 19th games of the past.

Recently stung by their reliance on the home run, the Dodgers dug into the archives to manufacture runs with small ball and aggressively deployed their bullpen before putting the game away with a four-run eighth inning to beat the San Diego Padres, 6-0, at Dodger Stadium.

Tony Gonsolin, recalled to start Wednesday, was cruising through four innings when he encountered trouble in the fifth. Pitching coach Mark Prior emerged from a mound visit with a runner on first base, two outs, and Fernando Tatis. Jr., the Padres’ best hitter on deck. Gonsolin then allowed a single to Jurickson Profar to put runners on first and second. His night ended there, after 82 pitches and a career-high eight strikeouts in 4 2/3 innings.

AJ Pollock drew a leadoff walk in the bottom of the fifth before Chris Taylor dropped a bunt single to third. Edwin Ríos then hammered a line drive off Padres starter Zach Davies’ glove for an RBI single. Austin Barnes next safely reached base with a safety squeeze to score Taylor from third and give the Dodgers (12-7) a two-run cushion.

Before the game, Dodgers manager Dave Roberts was unusually terse and defensive in his daily videoconference call with reporters.

Roberts was first asked if he had ever seen a group of prominent hitters simultaneously endure slumps together before. Cody Bellinger, Max Muncy, and Joc Pederson all entered Wednesday with batting averages under .200.

“It happens every year that a group of guys aren’t swinging the bat well,” Roberts said. “We have this conversation every year. Every manager does. So, I think the guys are handling it well.”

Roberts was then asked about the decision to recall and start Gonsolin before a question was posed about whether Clayton Kershaw was fine with getting pushed back a day. Kershaw was originally scheduled to start Thursday and was moved to Friday. The manager scoffed before saying Kershaw approved.

Next, Roberts was asked for his thoughts on Major League Baseball contemplating creating a bubble for the postseason. The Dodgers are projected to reach the playoffs – expanded to 16 teams this season — and Dodger Stadium could be one of the stadiums used if the bubble concept is executed Southern California.

“We’ll do whatever Major League Baseball and the Players’ Association come to an agreement about,” he said.

A reporter then joked that Roberts seemed “a little salty.”

The reporter said he’d try to come up with one.

“That’d be great,” Roberts replied before addressing another question about the Dodgers offense.

He insisted he believes his offense remains the deep, potent machine projected before the season started. He said Bellinger, embroiled in the worst of the team’s cold streaks, hasn’t been right mechanically all season and acknowledged he could be pressing coming off an MVP season.

“When you’re following up an MVP campaign, you certainly put expectations on yourself,” Roberts said. “But our messaging has been just, ‘Go out there, compete, take good at-bats and help us win baseball games.’ But, individually, I’m sure there’s some element of, I want to kind of want to do what I did last year. And that’s natural.”

Bellinger started Wednesday 0 for 3, grounding into his third double play in two nights in his first at-bat, to drop his batting average to .160. But he broke through with an RBI ground-rule double in the eighth before Justin Turner clubbed a three-run home run, giving the Dodgers breathing room in a game they badly wanted to win.