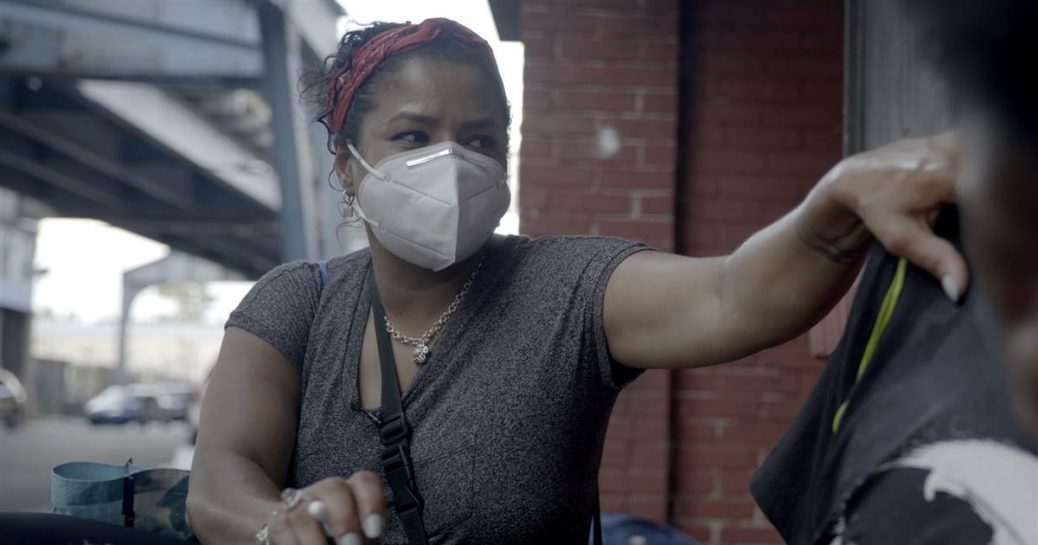 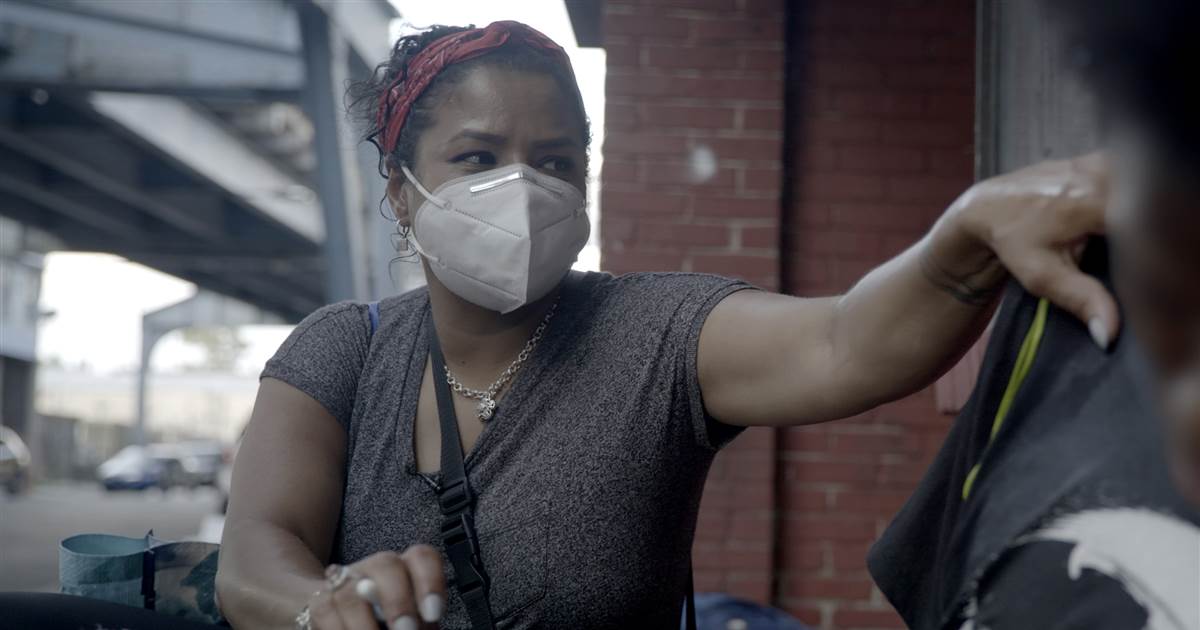 PHILADELPHIA — It was just before 8 p.m. in late June in the Kensington section of Philadelphia when Rosalind Pichardo, founder of the nonprofit Operation Save Our City, rushed to aid a young man in the middle of an opioid overdose.

“Sunshine, you want us to call the paramedics?” she asked the man. He remained unresponsive.

Pichardo worked for 15 minutes to revive him using the overdose-reversal drug Narcan.

After she saved his life, she wrote a name inside her pocket-size Bible. His was 410, all are the names of those she has saved. She calls them her “sunshines.”

Last year, there were 1,150 drug-overdose-related deaths in Philadelphia, 80 percent of those were from opioids, particularly the synthetic opioid, fentanyl. It’s too much for one woman to take on alone.

A crisis within a crisis

Pichardo has worked the streets since 2017 attempting to beat back an epidemic that has stymied city planners and health professionals for years. Her work got even harder this spring.

As the COVID-19 pandemic rages on, the opioid crisis has steadily worsened. More than 35 states report increases in opioid-related deaths, according to the American Medical Association, which issued a paper on July 20 citing local media reports of “increases in opioid-related mortality—particularly from illicitly manufactured fentanyl and fentanyl analogs” during the pandemic.

Indeed, overdoses nationwide jumped 42 percent in May, the Washington Post reported earlier this month, though not all of them were fatal, according to the Overdose Detection Mapping Application Program (ODMAP), a federal initiative that collects data from ambulance teams, hospitals and police.

In ODMAP’s June report they found a 17.59 percent increase in overdoses reported during the period of stay-at-home orders, that is March 19 through May 19. Over 61 percent of ODMAP participating counties reporting an increase in that time.

In Milwaukee County, Wisconsin, dispatch calls for overdoses increased more than 50 percent in March and April compared to the same time period last year. In Franklin County, Ohio, the first four months of 2020 had 50 percent more deaths than in the same period of 2019, according to the county coroner, who also reported a pattern of weekend spikes during the pandemic.

Pichardo doesn’t want to do it alone. She wants her sunshines to have a safe space to go, one where they aren’t at risk of dying alone in an alleyway or on a park bench. That’s why she believes in a city-supported supervised injection site.

In Philadelphia, the pandemic’s impact on the opioid crisis led to renewed calls by harm reduction advocates, the city’s district attorney and other activists for the nonprofit group Safehouse to open the country’s first government-sanctioned supervised injection site. Such a site would allow people who use opioids to use drugs with medical staff on hand to save lives in the event of an overdose.

“This is a prime example of why we need Safehouse,” said Pichardo, pointing to the overdose we witnessed as a high-risk, potentially fatal — yet avoidable — scenario. “The gentleman was using alone, he was on the ground by himself. If we weren’t around, he would’ve died. It’s really that simple.”

Safe injection sites may be a new concept in Philadelphia, but it’s a tested idea. Around the world, there are more than 100 safe injection sites. In Vancouver, Canada, a safe injection site known as Insite has been operational for over a decade, run by Vancouver Coastal Health, the regional health network. Since Insite began operating there have been no deaths inside.

After a two-year legal battle Safehouse was finally scheduled to open its doors in March after a federal judge ruled that opening the site did not violate a federal drug law known commonly as the federal “crack house statute,” which makes it illegal to operate any place “for the purpose of manufacturing, distributing, or using any controlled substance.”

The federal judge said the 30-year-old law would not apply to Safehouse’s overdose-prevention cause, writing that “the ultimate goal of Safehouse’s proposed operation is to reduce drug use, not facilitate it,” the Philadelphia Inquirer reported.

But local opposition from neighbors living near the proposed safe injection site thwarted its opening.

“Safe injection sites, in our opinion, are not going to solve the problem of the opioid crisis,”said Anthony Giordano, who started a Facebook group to lobby against Safehouse.

The U.S. attorney’s office in Pennsylvania also opposed the opening of the safe injection site and appealed the judge’s ruling allowing the site to open.

In June, the original federal judge granted a stay order, indefinitely postponing the opening, citing the ongoing concerns over the pandemic and civil unrest.

That hasn’t stopped Safehouse from continuing its fight for supervised consumption.

“It’s important to point out that the judge, in his opinion, said that he stands by his analysis that it’s a legal activity,” said Ronda Goldfein, vice president of Safehouse’s board of directors,who maintains the group still has legal authority to operate in Philadelphia. “[The judge] did not say, ‘I changed my mind on legality.’ He did not say, ‘The research doesn’t support this.’ He simply said, ‘Not now.'”

Though the issue has become a classic NIMBY — not in my backyard — battle, Philadelphia District Attorney Larry Krasner said the injection site is urgently needed and long overdue.

“Every day, we are at risk of an overdose that may occur on the street that would not have occurred inside of the supervised injection facility or a harm reduction center,” he said.

Safehouse had been considering multiple locations for the first site, with the goal to open many more through the city.

“In the ideal world, we would have been able to open in one neighborhood and then quickly open in another neighborhood, and then open in a third neighborhood. We still believe that it’s a problem that needs to be addressed in multiple sites throughout Philadelphia,” Goldfein said.

But those locations remain an ongoing hurdle: Goldfein said Safehouse is actively looking to lease a site and plans to implement pandemic-safety protocols similar to those instituted by other health services.

But for Rosalind Pichardo, who grew up in Kensington and looks after her cousin Louis, who is experiencing homeless and uses opioids, there’s always the fear that help may arrive too late.

Another cousin, Moises Cruz, 45, died during an overdose on May 27, during the pandemic. “He was using alone on the streets of Kensington and there was no Safehouse,” she said.

“It’s impacted people who can’t use around other people because of COVID,” she said. “People are dying alone now more than ever.”

Pichardo said there are far fewer outreach workers like herself on the streets because of the pandemic.

“There’s a lot more overdoses,” she said. “I’ve come across hundreds of outreach workers, but I don’t see them right now because of COVID.”

Pichardo now distributes hundreds of doses a day throughout Kensington, sometimes all before she even begins her 1 p.m. shift distributing food and grocery items to families, part of her work for her nonprofit, Operation Save Our City.

“I feel like we keep dragging our feet with this, and we’re losing more and more lives because it becomes politics,” she said.

It’s also made her work that much more difficult. She has to now protect herself and others from COVID-19, including the very people she is trying to help as they are overdosing.

“It’s difficult for me, especially, when it comes to trying to save someone, or even trying to administer Narcan, and having to not do that one step of giving someone rescue breaths,” she said.

Social distancing is nearly impossible when resuscitating someone who is overdosing, and the demand for Narcan has grown exponentially.

A safe injection site, she said, is what taking care of your neighbors looks like. Further, she said, it will make everyone safer.

“We have an obligation to the people who live in our community,” Pichardo said. “We’re supposed to take care of one another. We’re supposed to love thy neighbor. And that’s our reflection of loving thy neighbor, is putting them in a safe place, making sure they stay alive until they say, ‘I’m ready for recovery.’ You can’t put a dead person into recovery. It doesn’t work that way. At Safehouse, they have a chance to live.”