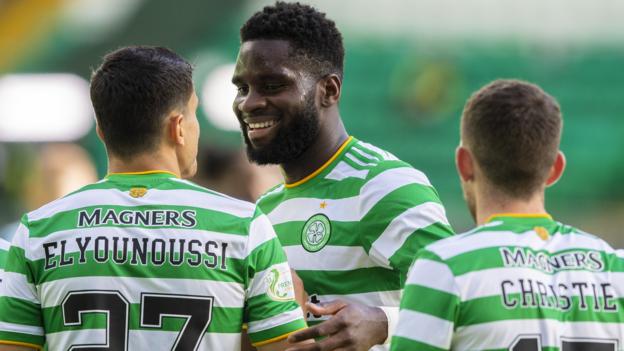 After Rangers won 1-0 at Aberdeen, Celtic responded in emphatic style.

On the day they unfurled the Premiership flag to celebrate their ninth title in a row – complete with fireworks in the empty stands – Neil Lennon’s side looked vulnerable early on.

Martin’s shot – deflected in off Christopher Jullien – was no less than they deserved as they went in 2-1 down at half-time.

But thereafter, Celtic looked imperious, with Edouard’s clever movement allowing him to net two further simple goals, getting on the end of James Forrest’s cross for his second and Celtic’s third, then pouncing on a rebound to complete his hat-trick.

Frimpong’s pace and skill was another highlight, as he too finished from six yards for his team’s second after a curled cross from his fellow full-back Taylor, and his driving run initiated the move for Edouard’s opener.

Substitute Klimala capped a powerful attacking performance from Celtic as he got on the end of a defence-splitting pass from Jullien to slide his first goal for the club past Ryan Fulton.

Man of the Match – Odsonne Edouard

What did we learn?

Celtic looked incredibly slick in attack, with Edouard’s intelligent runs allowing him to capitalise on the pace, skill and invention of Frimpong, Taylor, James Forrest, Ryan Christie and Mohamed Elyounoussi.

It is a frightening attacking unit that will put many teams to the sword this season, and rendered Hamilton’s positive start ultimately meaningless.

The only concern for Lennon will be the number of chances the visitors managed to create, especially in the first half.

But ultimately if they hit their stride in attack, teams will need to score a hatful against them to have any chance.

Klimala’s cameo and first competitive goal will also give the Celtic boss confidence in the depth of his forward options for the campaign ahead.

Hamilton, despite the scoreline, can take a huge amount from their performance.

Their season will not be defined by results away from home against the Old Firm.

What did they say?

“It’s pivotal we hold onto him, we don’t want him to go anywhere. That’s what’s pleased me over the last 12 to 18 months, his goal return as well as all the other things he brings to the game.”

Hamilton head coach Brian Rice: “I am disappointed to lose five goals, but Hamilton will not be judged in games against Celtic.

“We created a lot of chances and we scored as well, but you have to be clinical and you’ve got to keep the back door shut.”

Celtic travel to Rugby Park to face Kilmarnock at 16:30 BST next Sunday, while Hamilton host Ross County at 15:00 BST on Saturday.