A clerk pick an item for a customer order at the Amazon Prime warehouse in New York. Amazon Empire director James Jacoby describes the pace of work within the company’s warehouses as “incredibly grueling.” Mark Lennihan/AP hide caption 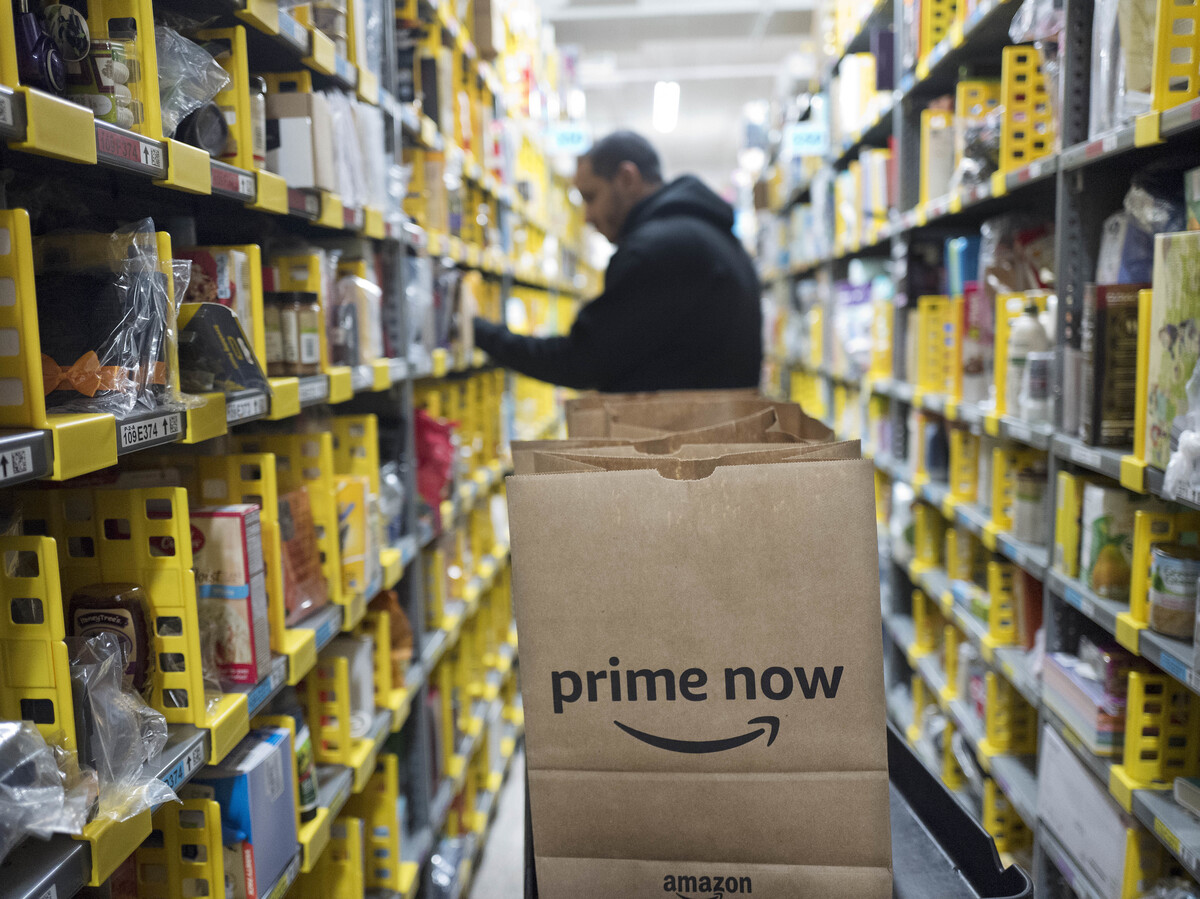 A clerk pick an item for a customer order at the Amazon Prime warehouse in New York. Amazon Empire director James Jacoby describes the pace of work within the company’s warehouses as “incredibly grueling.”

Amazon founder Jeff Bezos is now the richest man in the world, with an empire that stretches from Hollywood to Whole Foods — and even into outer space.

The new PBS FRONTLINE documentary, Amazon Empire: The Rise And Reign Of Jeff Bezos, investigates how Bezos transformed Amazon from an online bookseller into a trillion-dollar business that’s unprecedented in its size and reach. Director James Jacoby, who worked with fellow filmmaker Anya Bourg on the project, calls the company an “inescapable part of our modern lives.”

“It’s not just how the majority of Americans are shopping online,” he says. “It’s also these devices in our homes. It’s also the facial recognition software that’s used by police departments. It’s cloud computing for the government and national security establishment.”

Jacoby notes that Amazon’s ubiquity — and the fact that “so much power is pooled into the hands of one company and one man” — raises a host of issues. The company’s Echo smart speaker has been known to record — and occasionally listen to — the conversations of unsuspecting homeowners. In 2019, the European Union antitrust arm announced an investigation into Amazon’s use of data collected from third-party sellers.

“I think that [Atlantic writer] Franklin Foer in the film puts it best, which is like everything that’s amazing or awesome about Jeff Bezos and Amazon is also something to be feared about Amazon and Jeff Bezos,” Jacoby says.

On why, in part, Amazon began as a bookseller

[Bezos] recognized very early on the power of data to predict what people would want.

Books are easy to ship. … And [Bezos] also realized that in the online world, there would be an advantage that no single bookstore could hold all of the books in print. … He also, I think, saw an opportunity to learn about customers through what they read. He recognized very early on the power of data to predict what people would want. So in many ways, you are what you read and you could glean a lot about a customer from what he or she reads.

On working conditions in Amazon warehouses

We spoke to dozens of current and former employees in the reporting process. The nature of the work has changed a bit over the years. When Bezos was first building out these fulfillment centers all over the country in order to deliver on the promise of delivering packages quickly, it was almost ad hoc. They were growing so quickly. And there were a lot of complaints at the time about things like heat stress. There wouldn’t be the proper air conditioning in these warehouses, and people would be working like crazy to try to meet these quotas to get the packages out. People would be fainting in these warehouses. There’d be injuries.

Over time, the warehouses have become much more systematized, in part because of the automation of the warehouses and buying a robot company that helped to automate things. But one thing that hasn’t changed in talking to workers — both current and former — is the pace of work is incredibly grueling. You have to make rates. … The rate essentially measures how quickly you pick and pack items. … Every single worker we spoke to [talked about how] the rates were really high. They have a way of setting the rates for the whole warehouse — that if you don’t make that rate, then you can get a write up. And if you get three write ups, then you can be fired. There’s a lot of anxiety in these warehouses about making rates.

On a recent hack on Amazon’s “Ring” cameras

Ring makes these doorbell cameras, that was their first main device. … It’s a doorbell that has a camera on it. In part, Amazon liked the idea of it, because package theft is a big deal for the company — a lot of people get packages to their door and someone’s stealing that package. So now you can watch your front step. Of course, if the camera is watching the front step, it’s also watching the public space on the street as well, which is somewhat problematic. So there’s now this whole suite of Ring devices and Ring cameras, not just to monitor the outside of your home but also the inside of your home.

There was a recent hack of indoor Ring cameras, which was rather frightful. … There’s a little girl in her room and her parents had installed a Ring camera in that room and all of a sudden there’s a voice coming from the camera that’s basically terrorizing her as she’s alone in her room.

On how facial recognition software and data collection is in Amazon’s hands, and is vulnerable to hacks and bad agents

All of this data, all of these networks — it’s all up to Amazon to manage this well. And they say that that’s the thing that holds them accountable, keeps them responsible on a daily basis, is that they can’t breach customer trust. For a company that’s built its brand on building customer trust on delivering for customers, on not breaching their trust, these sorts of hacks, these sorts of problems, are devastating to their image, because it gets customers and citizens concerned about whether we should entrust a company like Amazon with all of this. And, of course, there are safeguards in place.

But I think some of the larger questions about Amazon are whether there are really any auditing systems, public auditing systems for cases of abuse. … We’re reliant on a private company to police abuse, and there’s no way to publicly audit whether they’re doing a good job of that. And that’s something that we asked Amazon executives about — not just about Ring cameras and Echo devices — but certainly facial recognition software, which is a very powerful tool that they have really encouraged police departments around the country to experiment with.

Essentially, what “break them up” really means is to try to limit the lines of business that Amazon can engage in. So, for instance, Amazon is this platform for online commerce that they themselves are competing on as a store against other stores and retailers. So she has this idea of maybe they shouldn’t be competing on a platform that they own, maybe they shouldn’t be allowed to be doing that, because they have an unfair advantage. That’s in part what break them up means. And so I think it’s certainly something that Congress is going to be considering. And I think some of the other candidates have been supportive of that idea of breaking them up.

When it comes to Jeff Bezos, he’s got two CEOs that are running Amazon and he has stepped away a bit from the company. I mean, he’s helping to expand it into India and other places. But as we understand it, his primary goal is to focus on his company Blue Origin. And Blue Origin is his space exploration company. It’s his rocket ship company. And essentially it’s the fulfillment of something that has been his lifelong goal and plan, which is to, as he puts it, build the infrastructure to go to space and to make it cost-effective for us to figure out what to do in space. …

[Bezos] claims — and I think he’s genuine in believing this — that he wants to save planet Earth, and his whole idea is that he wants there to be dynamism and growth. He believes in capitalism. He believes in consumerism. He believes that … we’re going to need to look to the heavens, essentially, to figure out how we can continue to live in a world of dynamism and growth. And that, in Jeff Bezos’ mind, means we may need to move heavy industry into space. We may need to mine other planets or planetary objects for their resources, or we may need to actually build space colonies. He is really serious about this.

Heidi Saman and Seth Kelley produced and edited this interview for broadcast. Bridget Bentz, Molly Seavy-Nesper and Meghan Sullivan adapted it for the Web.